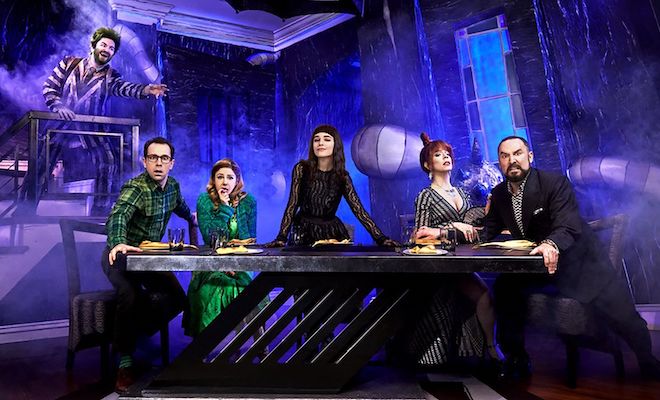 BASED ON THE GEFFEN COMPANY MOTION PICTURE,

WITH STORY BY MICHAEL MCDOWELL AND LARRY WILSON

It’s showtime, folks! The ghost-with-the-most comes to the stage in this edgy and irreverent musical comedy based on Tim Burton’s dearly beloved film. BEETLEJUICE tells the story of Lydia Deetz, a strange and unusual teenager obsessed with the whole “being dead thing.” Lucky for Lydia, her new house is haunted by a recently deceased couple and Beetlejuice, a delightful demon with a real zest for life. When Lydia calls on Beetlejuice to scare away anyone with a pulse, this double-crossing specter shows his true stripes, unleashing a (Nether)world of pandemonium, and the biggest sandworm Broadway has ever seen.

Tickets for BEETLEJUICE range from $69 – $179 and are available at www.telecharge.com (212.239.6200) or the Winter Garden Theatrebox office.  The playing schedule is: Monday – Saturday at 8pm, with matinees on Saturday at 2pm.  Please note there will be no performance Friday, March 29, or Saturday, March 30 at 2pm.  There will be an added performance Wednesday, April 24 at 2pm. Beginning April 29, the playing schedule is: Tuesday and Thursday at 7pm, Wednesday, Friday and Saturday at 8pm, with matinees Wednesday and Saturday at 2pm, and Sunday at 3pm.

BEETLEJUICE had its world premiere at the National Theatre in Washington D.C., where it played from Sunday, October 14, 2018, through Sunday, November 18, 2018.