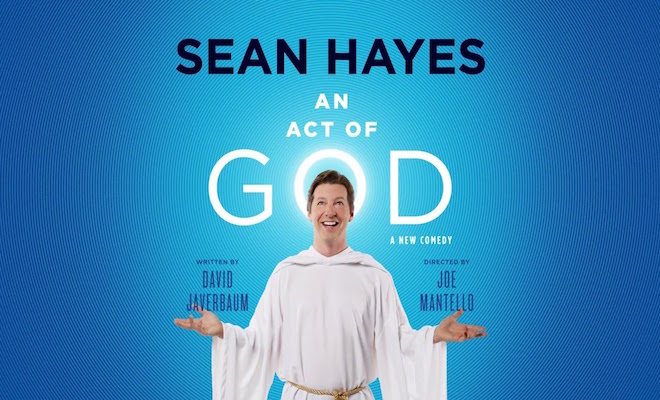 Final Two Weeks for ‘An Act of God’

The Strictly Limited Engagement Must Conclude on Sunday, September 4 at 3PM
At Broadway’s Booth Theatre

“SEAN HAYES IS THE FUNNIEST GUY IN HEAVEN (AND EARTH).” ­
– Los Angeles Times

An Act of God, which also features David Josefsberg as Michael and James Gleason as Gabriel, began performances on Saturday, May 28, 2016 and officially opened on Monday, June 6, 2016.

An Act of God is based on the critically acclaimed book written by God and transcribed by David Javerbaum. Javerbaum is a 13-time Emmy Award winner for his work as a head writer and executive producer for “The Daily Show with Jon Stewart.”

The play premiered on Broadway on May 7, 2015 and ran in an acclaimed, limited run through August 2, 2015 starring God in the body of Jim Parsons. It was the first Broadway production of the 2015-2016 season to recoup its initial investment.

The King of the Universe is back to tackle His greatest challenge yet: a second summer in New York. God takes the form of Emmy Award winner Sean Hayes in An Act of God, a 90-minute comedy where the Almighty and His devoted Angels answer some of the deepest questions that have plagued mankind since Creation. He’s returned to set the record straight to a whole new crop of believers … and He’s not holding back!

The Agreement for God to use Sean Hayes’ body was brokered through Actor’s Equity Association.
The show is entirely subsidized by angels.

The playing schedule for An Act of God is available at the official website: www.AnActOfGod.com