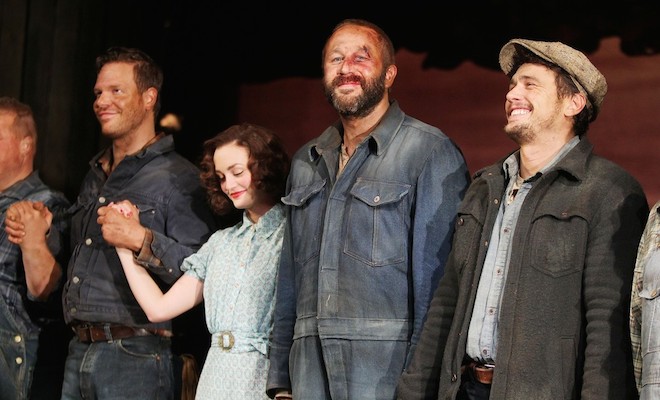 FINAL 2 WEEKS TO SEE ”OF MICE AND MEN”

“Painfully honest and powerfully moving, two qualities that are no longer to be found with any regularity on Broadway.” – The Wall Street Journal

“One of the greatest of all American plays.” – Toronto Star

Adapted from his own classic novel, John Steinbeck’s Of Mice and Men is an essential adventure, an inspirational portrait of the American spirit and a heartbreaking testament to the bonds of friendship.

Of Mice and Men tells the story of George (James Franco) and Lennie (Chris O’Dowd), an unlikely pair of friends drifting from job to job across the farms and fields of California, holding fast to their dream of one day having an acre of land they can call their own.

For tickets, visit the Longacre Theatre box office (220 West 48th Street) or Telecharge.com (212-239-6200).  Ticket prices range from $35-$147.00. Of Mice and Men plays Tuesday, Wednesday, Friday and Saturday at 8pm, Thursday at 7pm, Wednesday and Saturday at 2pm and Sunday at 3pm.  A limited number of $35 student tickets (inclusive of a $2 facility fee) will be available for each performance when the box office opens for that day’s performance(s) with student identification (one ticket per person, subject to availability).  Of Mice and Men will play a strictly limited engagement through Sunday, July 27, 2014.