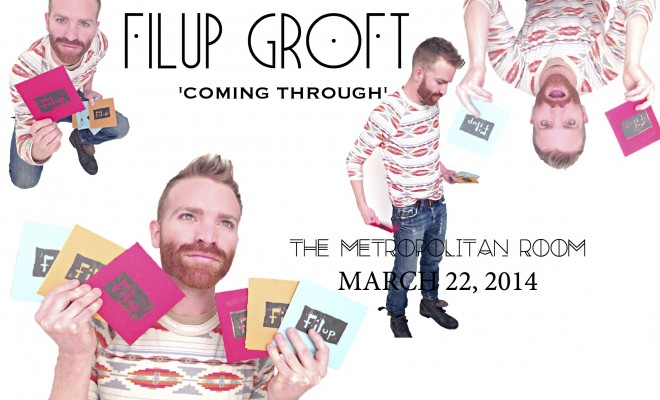 Filup groft is a red bearded singer/songwriter born and raised by James and Barbie Groft along with his 6 brothers and 1 sister. Coming from a very musical family, it was hard to get this raspy voiced child to stop singing. At the age of 10 his parents blessed him with his first upright piano and he knew he had found his love! Although leaving his family was one of the hardest decisions he’s had to make, Filup moved away from his home town in AZ at 18yrs to pursue a career in acting! After living on the road for 10 years, some of his highlighted moments include: traveling the entire U.S. with the 1st national tour of “OKLAHOMA!,” the national/international tour of “Chicago the musical,” living at sea for two years as a production singer for Norwegian Cruise Lines, and performing in international venues with some of the most amazing talents in the business! So blessed! So grateful! In 2012 he returned to NYC and decided to plant down his roots. (It’s not easy living out of a suitcase for 10 years!!!) In the past two years he has finished writing and composing his debut album “Coming Through”.  A record inspired by life-changing experiences. It  was a beautiful journey and that’s what makes this opportunity so special.

He will be performing at The Metropolitan Room in his own monthly show giving people the chance to come hear his haunting melodies in person. These stories are inspired by all the beautiful people he has met along his journey and everyone will find that moment of, ” I have so been there!” And its nice to be able to relate to others who can help you grow! Mission statement: Write music that will change the world, hearts, inspire all and spread love!