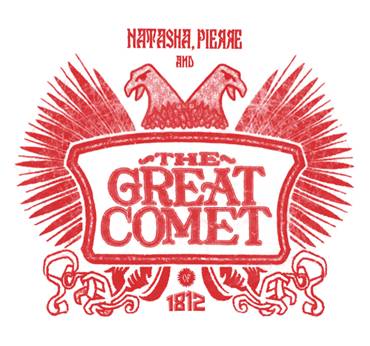 (New York, NY – September 3, 2013) NATASHA, PIERRE & THE GREAT COMET OF 1812, which concluded a hit summer engagement downtown on September 2nd, will take up residence in the Theater District, on West 45th Street between Times Square and 8thAvenue, for a 14-week limited run beginning September 24th. Since its first production at Ars Nova in the fall of 2012, the show has become a sensation, meriting expansion this summer to a 199 seat pop-up supper club built specifically for the production in the Meatpacking District. After playing to packed houses since May, producers Howard & Janet Kagan will bring Dave Malloy’s acclaimed electopop opera and its opulent custom venue – Kazino – to the heart of the theater district.

“From day one, we’ve been committed to giving this unique and spectacular piece of theatre the kind of life it deserves,” said producers Howard & Janet Kagan. “Once the show caught on downtown, we explored a number of options of where it could continue following our summer engagement, and we’re very fortunate to have found a prime spot in the heart of the theater district. We’re ecstatic that audience response has made it possible for us to keep The Great Comet burning brightly in New York.”

Tickets are now on sale through Telecharge.com. NATASHA, PIERRE & THE GREAT COMET OF 1812 will run through December 31st at its new location. Tickets are priced at $125 with prime and premium seating available for $175 and $237.50, respectively. The playing schedule will be as follows: Tuesdays at 8, Wednesdays at 2 and 8, Thursdays at 8, Fridays at 8, Saturdays at 2 and 8, and Sundays at 3. Audiences will receive an assortment of Russian snacks at their tables, including the show’s signature pierogies.

Casting will be confirmed at a later date.

Ghostlight Records will release the original cast recording of NATASHA, PIERRE & THE GREAT COMET OF 1812 in the fall of 2013. The two-disc album was recorded Monday, August 26th at MSR Studios in New York City. The album was produced by Dean Sharenow, with Kurt Deutsch and Howard & Janet Kagan serving as Executive Producers.