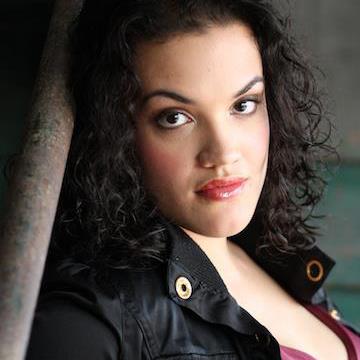 Desiree Rodriguez: Why Are You Beasting Interview

Desiree Rodriguez is a rising performer in theatre and film who’s currently starring in the NYC Fringe Encore production of David Don Miller’s Why Are You Beasting, a darkly comic, gripping new play that explores the chaos of the New York City public school system through the eyes of a first-year teacher in one of the most notorious high schools in the Bronx.

Why Are You Besting will run from September 29-October 15 at The Players Theatre in NYC (115 MacDougal Street). Click here for tickets!

1. Who or what inspired you to become a performer? I was always the kid that mugged whenever I was in front of an audience even as far back as my kindergarten graduation. And I grew up watching my uncles dance, my dad singing and playing the drums, so inspiration was everywhere. But I can tell you the moment I drank the Kool-Aid was when I was 16 and a junior in high school, having my first curtain call as “Dorothy” inThe Wiz where I was like, “Yup, this is for me. I’m in it for life.”

2. Who haven’t you worked with that you would like to? Oh man that list is long and somewhat far fetched. In the acting world: Bobby Cannavale, Joseph Gordon-Levitt, Sara Ramirez, Lauren Graham, Rita Moreno, I could go on for a while. In the singing world if I ever got to duet with Gavin Degraw and/or Sara Bareilles, I could die. Right there & then.

Desiree Rodriguez and Gonzalo Trigueros in “Why Are You Beasting?”, Photo Credit: Markus Potter – NY Rep3. What attracted you to Why Are You Beasting? Initially, it was the story line. Having my mom work in the school system and going to a high school that had MANY students like we have as characters in our show, it was something I more than identified with. And when I first read the script, it literally made me GUFFAW out loud. Our playwright, Dave Miller, hit the nail on the head so specifically with each and every character from their language to their individual stage directions; this world was crystal clear and REAL right from the page.

4. What do you identify most with about your character? What’s funny is in real life I am NOTHING like my character “Roberta.” This chick is grade A bad ass. Although I definitely went to high school with this kind of girl, the ones who radiated energy, were fearless in their language and actions, got into fights with anyone who messed with them. Yeah, I would’ve gotten in MAJOR trouble as a kid if I behaved the way she does. If anything, I do sometimes wish I was as audacious as she is. I think the one thing we DO have in common is voice volume is a foreign concept to us.

5. What do you hope audiences come away with after seeing Why Are You Besting? Above all else, I hope that our audience allows themselves to LAUGH and be entertained. Yes, our overall subject matter about the broken education system begs for a lot of discussion and questions, and I do hope people leave having those conversations. But one of the things I adore about our play is that it has this discussion with humor, albeit dark, but it’s still friggin funny. Let’s call it being edu-tained.

Photo Credit: Markus Potter – NY Rep6. Why You Beasting is part of the NYC Fringe Encore Series. Are you approaching the show or your character any differently than in its initial run in the NYC Fringe Festival? Actually, I have the awesome privilege of adding another role to my belt this time around. Along with playing student “Roberta,” I will be also be playing Spanish teacher “Esperanza Encarnacion.” She’s probably one of my all time favorite characters in the play and has some of the funniest scenes. So I get to sharpen a few skills: polar opposite accents, different physical demeanors, playing both older and younger than my actual self, and wicked quick quick-changes!

In a way though, I have to approach the play a little differently, because I’m starting from scratch with a new character. And what’s also amazing about getting to the Encore series is that I don’t have to say goodbye to “Roberta” yet. I was just starting to sink my teeth into her and her journey when we did Fringe so I can now keep adding more layers to her as well.

Photo Credit: Dirty Sugar Photography7. I have seen you in a few festival shows now. What do you enjoy about being part of a show that plays in a festival? What I love about being a part of these festivals is that, most of the time, the work is brand new. It’s like an ultimate imaginary playground game. Sky’s the limit with choices, and though that may present itself as a challenge, you get to allow yourself to make mistakes but with no one to compare yourself. Just the you from yesterday’s acting choices. It keeps me on my toes. And it never ever gets tiring witnessing a playwright’s joy of seeing and appreciating their world on the page come to life in front of them for the first time.

8. What have you learned about yourself from being a performer? One of the things I’m constantly learning is how far my brain and body can be stretched. Our art form is a living, breathing entity that requires the use of all 5 senses; it doesn’t let me sit back and rest on my laurels. With each and every role that I take on, I let myself become a little more fearless.

9. What’s the best advice you’ve ever received? Allow yourself to be enough.

10. If you could have any super power, which one would you choose? Telepathy. What can I say? I’m a nosy perkins.

Off Broadway: “Elizabeth” in Tricks the Devil Taught Me. National Tours: Kennedy Center’s Barrio Grrrl! (Ana), Tres Vidas (Frida Kahlo, Rufina Amaya, & Alfonsina Storni). Regional credits: “Lourdes” in This One Girl’s Story (NYMF), “Marisa” in the East Coast premiere of Kingdom, “Lucille Frank” in Parade, and “Maria” in Twelfth Night. Desiree can also be heard singing in the film, Black Nativity, out this November. She is a member of the Broadway Inspirational Voices directed by Michael McElroy. She received her BFA in acting from Montclair State University.