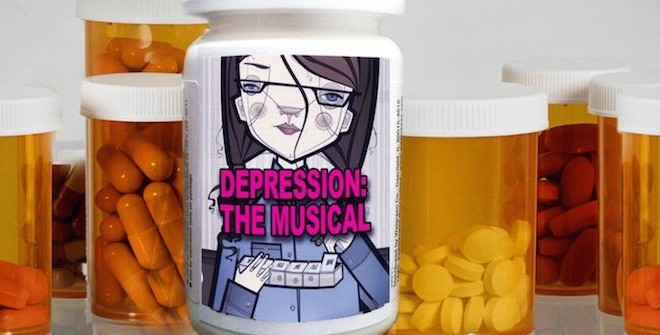 When I was a young lad, if I didn’t hear it from my mother, I probably heard it from a librarian or two: “Don’t judge a book by its cover.” Unlike other lessons (“Patience is a virtue,” for example), this one stuck with me over the years and to this day, I try not to judge books—or anyone, for that matter—by their external appearances. When I told my friends and coworkers that I would be seeing a Fringe show called Depression: The Musical, I was met with some interesting responses that reminded me of this idiom, the most common question being, “Is it a comedy?”

Let’s be honest: most people would not necessarily attend a show called Depression: The Musical expecting to feel uplifted or inspired by the show’s end. But I have to say that after going into it with an open mind, this autobiographical pop-rock musical took me by surprise in the best of ways.

Depression: The Musical is currently playing in the Flamboyan Theatre at the Clemente as part of the 2014 New York International Fringe Festival. Get your tickets now!
Related Items

← Previous Story AN EXCELLENT SHOW: RUFFIN AND VAN ZURIN ARE “KINGS OF KONG” AND THEATRE