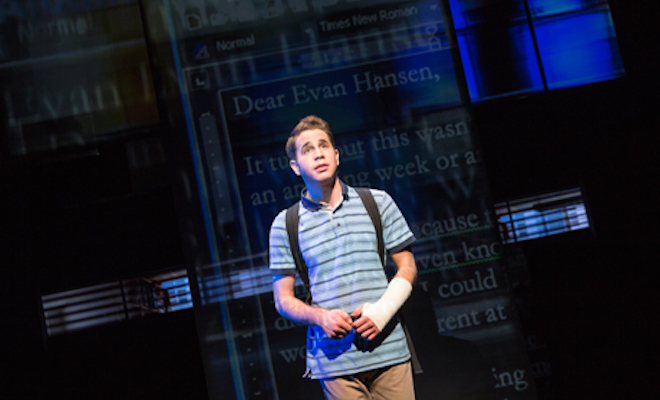 BROADWAY DATES REMAIN THE SAME
PREVIEWS BEGIN MONDAY, NOVEMBER 14, 2016
OPENING NIGHT DECEMBER 4, 2016
TICKETS ON SALE NOW
New York, NY (September 12, 2016) – Producer Stacey Mindich has announced that the Broadway premiere of the new musical Dear Evan Hansen has found a new home: it will officially open at the Music Box Theatre (239 West 45th St), and not at the Belasco Theatre, as previously announced.
All dates remain the same; the show will still begin previews on November 14, 2016, with an official opening night on December 4, 2016.
Customers purchasing tickets on Telecharge.com or by phone prior to September 18 may be sold Belasco tickets, but they and all Belasco ticket holders will be notified via email or telephone regarding the method of exchange to the Music Box. All previous transactions will remain intact, customers will have comparable, if not identical, locations at the Music Box Theatre.
With a book by Obie Award-winner Steven Levenson, score by Tony® Award nominees Benj Pasek & Justin Paul, and direction by 3-time Tony® Award nominee Michael Greif, Dear Evan Hansen had its world premiere at Arena Stage, Washington D.C., this past summer and recently concluded its record-breaking New York debut at Off-Broadway’s Second Stage.

About the Music Box Theatre:
Toward the close of 1919, the prominent theatrical producer Sam H. Harris made a proposition to his friend Irving Berlin: if the popular songwriter would devise a musical revue, Harris would find a theatre for it. Berlin responded with The Music Box Revue and in 1920 the Music Box Theatre was built to house the show. The Shuberts began acquiring shares of the venue from Harris in the 1920s. When Harris died in 1941, his wife sold half the shares in the theatre to the Shuberts, and half to Berlin. From that point on, Berlin and Shubert became equal partners in the ownership of the house. In 2007, the Berlin share of the theatre was sold to Shubert, now the sole owner of the theatre.