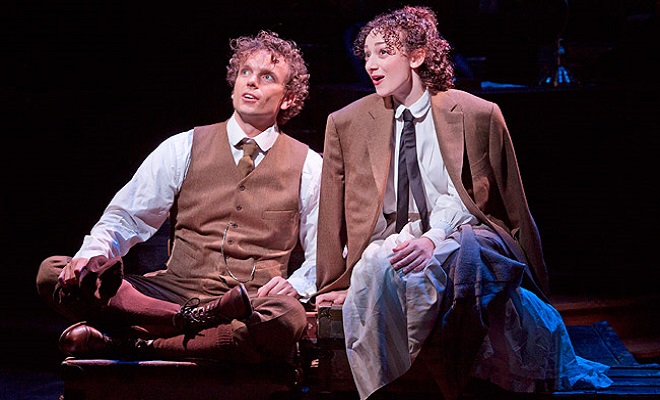 FULL PERFORMANCE TO BE BROADCAST ONLINE FOR FREE

(November 30, 2015 – New York, NY) Producers Ken Davenport and Michael Jackowitz in association with Live Stream are proud to announce that the new musical DADDY LONG LEGS will be the first ever Broadway or Off-Broadway performance to be broadcast over the Internet free of charge on Thursday, December 10, 2015 at 8:00 pm EST. The musical, which has had acclaimed productions throughout the United States as well as international productions in Canada, Tokyo and London’s West End before opening in New York, will partner with Livestream and make history as it allows audiences worldwide to view a live performance in full. Viewers can visit the show’s website, www.DaddyLongLegsMusical.com/Livestream now to register to watch the performance.

A very limited number of seats are available for purchase for this historic event, and can be purchased now at www.telecharge.com or by calling Telecharge.com at (212) 239-6222.

“Anyone that reads my blog knows that I’m uber passionate about figuring out how to distribute our content to the rest of the world in a way that helps bring new audiences to our shows and to the theater in general,” said Producer Ken Davenport. “I believe that the digital distribution of Broadway and Off-Broadway productions could be the biggest audience development tool we have at our disposal . . . that we are not using. So we’re going to start with Daddy Long Legs, and show this beautiful musical to the world for free, in the hopes that more shows and more audiences will follow.”

“I’m delighted that Daddy Long Legs will be the first ever musical to be live-streamed from New York,” said director and book-writer John Caird. “Ever since my first shows in New York – Nicholas Nickleby and Les Miserables – I have been ambitious to share my work with as many people as possible, but especially those for whom the journey to see the live show is just too far or too expensive.”

Viewers can register now via www.DaddyLongLegsMusical.com/Livestream to watch the broadcast live on Thursday, December 10. Electronic doors will open at 7:30pm, with the performance beginning at 8pm EST, live from the Davenport Theater.

Following the live broadcast at 8:00PM EST, the performance will be replayed Thursday evening at 8pm PST, and on Friday, December 11th at 8PM GMT and 8PM JST allowing international viewers to enjoy the performance in primetime.

Based on the classic novel which inspired the 1955 movie starring Fred Astaire—a beloved tale in the spirit of Jane Austen, The Brontë Sisters, and “Downton Abbey”—this heartwarming Cinderella story about a witty and winsome young woman and her mysterious benefactor has charmed audiences of all ages from Los Angeles to London. Critics are cheering: Daddy Long Legs has “echoes of She Loves Me and top-notch performances” and “is one of the most enthralling, entertaining and moving love stories on the American musical theater stage.”

DADDY LONG LEGS tells the extraordinary tale of Jerusha Abbott (McGinnis), the oldest orphan in the John Grier Home. One day, a rich, anonymous benefactor (Halpin) decides to send her to college, but she must write him a letter once a month. Unaware of his identity, she invents a nickname for him: Daddy Long Legs. Through her brilliant and witty letters, Jerusha shares her experiences of college while discovering her own identity and reveling in the wonders of literature, adventure and love. But one key fact eludes her – who is Daddy Long Legs?

FOR MORE INFORMATION ON