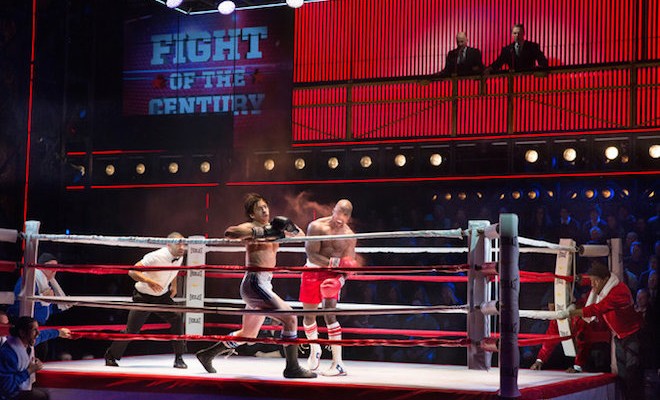 In its first ever Broadway partnership, JamCam, a new app that allows fans to create instant mini-music videos on their phone or tablet teams up with ROCKY to create a fan experience like no other.  Using the app., fans will submit 15 second videos that capture their Go the Distance moments and feature the ROCKY theme song.  All videos will be featured on the JamCam website where fans can vote for their favorite by sharing it to Facebook or Twitter.  The winner with the most shares will receive a night out in NYC including dinner, hotel stay and tickets to the show.  For more information please visit www.jamcam.co/rocky

ROCKY brings to life the iconic and inspiring story of struggling small time Philly boxer, Rocky Balboa, who gets a once-in-a-lifetime shot to go the distance against heavyweight champ Apollo Creed.   Both an adrenaline-infused spectacle and a surprising story of blossoming romance between two lonely outsiders, ROCKY is a heart-stopping and viscerally theatrical new musical for everyone brave enough to follow their dream

Terry Teachout from The Wall Street Journal hails ROCKY as “an unpretentious slice of honest entertainment whose rock-‘em-sock-‘em finale will set the snobbiest of theatergoers to cheering in spite of themselves.”  David Cote from Time Out NY exclaims “ROCKY send us staggering into the night punch-drunk, love-struck and begging for more.” Thom Geier from Entertainment Weekly says it “Delivers edge-of-your-seat thrills!” Rex Red from The Huffington Post proclaims “You go away from ROCKY hugely entertained, with a song in your soul and a hope in your heart.”  Chris Jones of the Chicago Tribune exclaims ROCKY is “a massive theatrical spectacle!  There will be no questions in theatergoers’ minds that they have experienced the thrill of the fight.” And Richard Zoglin of TIME reports ROCKY “Turns an unlikely film property into a Broadway musical with both spectacle and heart.”

ROCKY features an original score by the Tony Award-winning  team Stephen Flaherty and Lynn Ahrens (Ragtime, Once on This Island), with a book by multiple Tony Award-winner Thomas Meehan (The Producers, Hairspray, Annie) and Sylvester Stallone, who was nominated for an Academy Award for Best Original Screenplay for the 1976 Oscar-winning Best Picture, Rocky.  The production is directed by Tony nominee Alex Timbers (Bloody, Bloody Andrew Jackson), and features choreography by Tony nominees Steven Hoggett (Once) and Kelly Devine (Rock of Ages).

Tickets can be purchased at the Winter Garden box office (1634 Broadway), by visiting Telecharge.com or by calling 212-239-6200.  Please visit ROCKYBROADWAY.com for more information. The performance schedule is as follows:  Tuesday at 7pm, Wednesday – Saturday at 8pm, Wednesday and Saturday at 2pm and Sunday at 3pm.