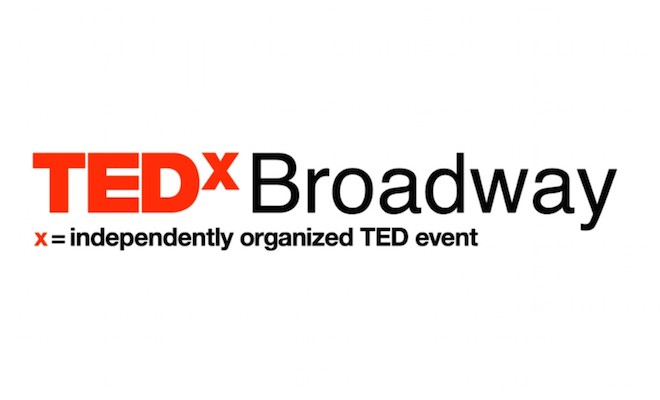 “WHAT’S THE BEST BROADWAY CAN BE?”

NEW YORK, NY (February 5, 2015) — The annual conference that brings together innovative minds and industry experts to help shape the future of Broadway announces the final lineup of speakers for TEDxBroadway on Monday, February 23, 2015 at New World Stages (340 West 50th Street) beginning at 11:00 a.m.  Tickets are priced at $100.

Newly added speakers for TEDxBrodway 2015 are:

Adam Sobel is a professor at Columbia University’s Lamont-Doherty Earth Observatory and Fu Foundation School of Engineering and Applied Sciences. He is an atmospheric scientist who specializes in the dynamics of climate and weather, particularly in the tropics, on time scales of days to decades.

Daniel J. Watts is a performer, writer and activist with seven Broadway credits to his name including After Midnight, Memphis, In the Heights and Motown: The Musical.

@BroadwayGirlNYC runs one of the most-followed theater accounts on Twitter. She leads interactions between fans, shows, industry insiders and performers in the world of “showcial” networking.

Ayad Akhtar is an author, screenwriter and playwright whose debut novel American Dervish was named to several Best of 2012 lists, including Kirkus Reviews and O: The Oprah Magazine. His play Disgraced premiered at New York’s LCT3/Lincoln Center Theater in 2012, won the Pulitzer Prize for drama in 2013, and is currently on Broadway.

Kevin Lyman is the creator and producer of the Vans Warped Tour, the longest running traveling music festival in North America today. Celebrating its 20th anniversary this year, the tour has played to over nine million fans.

Benjamin Scheuer leads the band Escapist Papers and is the writer and star of autobiographical solo show The Lion, which debuted off-Broadway this year following runs in Edinburgh and London. He’s winner of the 2013 ASCAP Cole Porter Award for songwriting and the 2013 Musical Theatre Network Award for best lyrics.

Leslie Koch is president of the Trust for Governors Island, which is responsible for the planning, redevelopment and operation of the 150-acre section of the island being transformed into a New York destination.

Kacie Hultgren works in Broadway set design (Disgraced, The Country House) and is a 3-D printing expert. Her use of early DIY 3-D printers for scale modeling led to an online following in the 3-D printing community, where she goes by the handle PrettySmallThings.

Ben Wellington is a computer scientist and data analyst whose blog, I Quant NY, uses New York City open data to tell stories about everything from parking ticket geography to finding the sweet spot in MetroCard pricing. His articles have gone viral and, in some cases, led to policy changes. Wellington teaches a course on NYC open data at the Pratt Institute and is a contributor to Forbes and other publications.

Benj Pasek & Justin Paul are the Tony-nominated songwriters of the Broadway musical, A Christmas Story. Their score for the show received a Drama Desk nomination for Outstanding Music. They are also the composers behind the Off-Broadway musical Dogfight, a Best New Musical nominee for the Drama League, Lucille Lortel and Outer Critics Circle awards.

Laurie Santos, Associate Professor of Psychology at Yale University, is a cognitive psychologist who studies the evolution of human cognition by exploring how animals think about the world. She was recently voted one of Popular Science magazine’s Brilliant 10 Young Minds.

Kirsten Sabia is Vice President of Marketing Services for the PGA TOUR, where she oversees marketing efforts for the tour’s owned and operated tournaments.

Osh Ghanimah is an actor and the Founder and CEO of Broadway For All, a NYC-based nonprofit born out of his fellowship through the Office of the President at Harvard University.

Emily Simoness is the Founder and Executive Director of SPACE on Ryder Farm, a nonprofit artist residency program committed to supporting and developing artists and their work.

TEDxBroadway is co-organized by Damian Bazadona, founder of Situation Interactive, and Jim McCarthy, CEO of Goldstar. They’re proud to welcome back co-organizing sponsors Jujamcyn Theaters, Google, and Broadway.com.  Support for the TEDxBroadway Young Professionals & Students Program is provided by the Nederlander Organization and the Shubert Organization.

Additional details are available at TEDxBroadway.com.

Tickets can be purchased at http://www.eventbrite.com/e/tedxbroadway-tickets-12624455085.

About TEDx (x = independently organized event): In the spirit of ideas worth spreading, TEDx is a program of local, self-organized events that bring people together to share a TED-like experience. TEDx events combine TED Talks videos and live speakers in a small group setting to spark discussion and form connections. TED provides general guidance for the TEDx program, but TED is not involved in the organization of TEDx events.

About TED: TED is a nonprofit devoted to spreading ideas, usually in the form of short, powerful talks (18 minutes or less). TED began in 1984 as a conference where Technology, Entertainment and Design converged, and today covers almost all topics — from science to business to global issues — in more than 100 languages. Past TED speakers include Bill Gates, Jane Goodall, Elizabeth Gilbert, Sir Richard Branson, Benoit Mandelbrot, Philippe Starck, Ngozi Okonjo-Iweala, Isabel Allende and former UK Prime Minister Gordon Brown. Two major TED events are held each year: The TED Conference each spring in Long Beach, California (along with a parallel conference, TEDActive, in Palm Springs), and TEDGlobal each summer in Edinburgh, Scotland. For information about TED’s upcoming conferences, visit http://www.ted.com/registration.