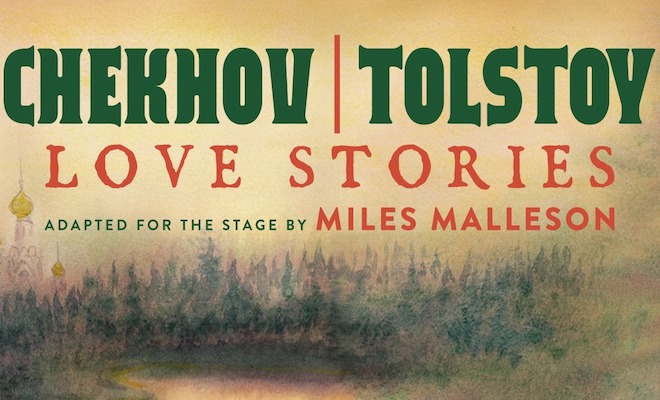 Adapted For the Stage By:
Miles Malleson (Conflict, Yours Unfaithfully)

“Chekhov, whatever his standing as a playwright, is quite probably the best short-story writer ever.” – William Boyd, The Telegraph

“Chekhov’s stories are as wonderful (and necessary) now as when they first appeared.” – Raymond Carver, considered to be one of America’s greatest short-story writers

Chekhov’s An Artist’s Story tells the story of Nicov, a painter who encounters two very different women while on a visit to the country. The flirtatious Genya flatters the artist with questions about miracles and the eternal, while her pragmatic sister Lidia ridicules the artist, questioning the necessity of landscapes in a world where people are poor and hungry. Together, they bring him to a new understanding of himself. The first production of The Artist came in 1919, with Malleson in the title role.

“Tolstoy remains a giant in the world of literature… His pacifism, his advocacy of passive resistance to evil through non-violent means, has had incalculable influence on pacifist movements in general and on the philosophical and social views and programs of Mahatma Ghandi, Martin Luther King and Cesar Chavez.” – Alexander Fodor, A Quest for a Non-Violent Russia

Tolstoy’s What Men Live By tells the story of a Russian peasant couple whose lives intersect with a mysterious stranger whose odd ways and brilliant smile bring them to a new understanding as well. What Men Live By reflects Tolstoy’s dedication to living out a Christian pacifism based on personal conscience. In the midst of World War I, Malleson was inspired by Tolstoy’s empathetic vision. What Men Live By premiered as part of an all-female student program by London’s Academy of Dramatic Arts, providing audiences with “the pure milk of the Tolstoyan word on loving-kindness.” Audiences shell-shocked by the Great War welcomed this balm, just as theatergoers today will warm to Tolstoy’s mystical tale of love and redemption.

Performances for Chekhov/Tolstoy: Love Stories will be Tuesday through Saturday evenings at 7:30PM with matinees Saturday and Sunday at 2PM. Additional Wednesday matinees at 2PM on February 5th & 19th and March 4th & 11th; no evening performances on February 5th, 11th, or 18th. All performances will take place at Theater Row (410 West 42nd Street between 9th and Dyer Avenues).

Tickets for Chekhov/Tolstoy: Love Stories will be $35 to $65, with Premium Seats available at $79 (all include $2.25 Theatre Row restoration fee) and can be purchased online at Telecharge.com, by phone at 212-239-6200 or in person at the Theatre Row Box Office.

“Thank heaven for the unwavering commitment of Jonathan Bank, the theatrical archaeologist whose Mint Theater Company unearths long-forgotten plays and imbues them with new life,” declared The New York Times in response to a recent Mint production. Terry Teachout writing about Mint’s production of Conflict in The Wall Street Journal said “I’ve reviewed 13 Mint productions since 2005, each one a gem—but it’s still worth saying yet again that no New York-based theater company has a better batting average. The invisible hero of Conflict is, of course, Jonathan Bank, the Mint’s producing artistic director. It’s a wonder how he manages to track down so many plays that both deserve and richly re-pay a second hearing. Mr. Bank is one of a handful of theater artists in America whose name is an absolute guarantee of quality, and Conflict is further proof of his perfect taste.”

Mint was awarded an OBIE Award for “combining the excitement of discovery with the richness of tradition” and a special Drama Desk Award for “unearthing, presenting and preserving forgotten plays of merit.”

For more information, including photos and videos of Mint productions, visit minttheater.org.