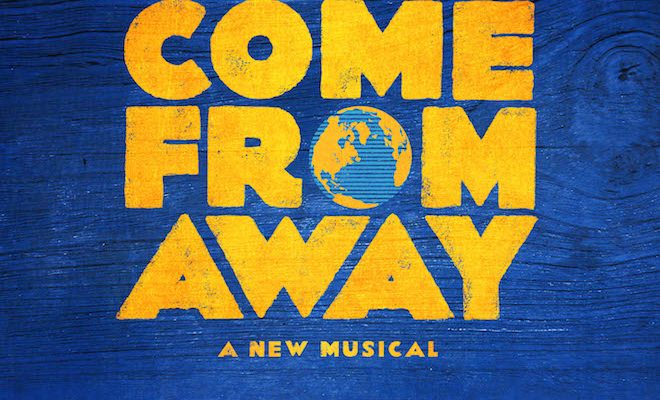 ‘Come From Away’ Begins Performances 2/18

(New York, NY) The new Broadway musical COME FROM AWAY has announced that a limited number of $38 general rush tickets (including the $2 facility fee) will be available at the Gerald Schoenfeld Theatre box office (236 West 45th Street) when it opens for that day’s performance(s). Limited to two tickets per person, tickets are subject to availability. Cash and major credit cards are accepted.

COME FROM AWAY, which was recently nominated for 14 Helen Hayes Awards in Washington, DC, will begin performances at Broadway’s Gerald Schoenfeld Theatre tomorrow, Saturday, February 18, 2017, and officially opens Sunday, March 12, 2017.

In a heartbeat, 38 planes and 6,579 passengers were forced to land in Gander, Newfoundland, doubling the population of one small town on the edge of the world.

American Airlines is the official airline partner for COME FROM AWAY.

COME FROM AWAY was originally co-produced in 2015 by La Jolla Playhouse and Seattle Repertory Theatre, and presented in 2016 by Ford’s Theatre in Washington, DC and Mirvish Productions at the Royal Alexandra Theatre in Toronto, CA. COME FROM AWAY (NAMT Festival 2013) was originally developed at the Canadian Music Theatre Project, Michael Rubinoff Producer, Sheridan College in Oakville, Ontario, Canada and was further developed at Goodspeed Musicals’ Festival of New Artists, in East Haddam, CT. The Canada Council for the Arts, The Ontario Arts Council, and the Fifth Avenue Theatre in Seattle WA also provided development support.