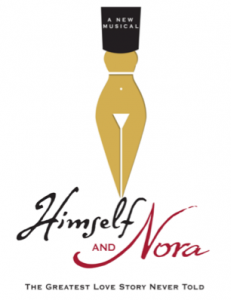 Cole Burden (The Bridges of Madison County national tour, Les Miserables national tour) will join the cast of Himself and Nora, the new musical currently running at the Minetta Lane Theater, starting Tuesday, July 26, 2016. Cole will assume the role of “Priest” and others.

Himself and Nora has a book, music, and lyrics by Jonathan Brielle. The production is directed by Michael Bush with musical direction by James Sampliner, produced by Cherie King and executive produced by R. Erin Craig.

It was one of the world’s great romances. She was the country girl from Galway whose burning sexuality and acerbic wit inspired the genius of James Joyce. Himself and Nora is a passionate musical that reveals the private life of one of modern literature’s most controversial figures and illustrates the untold story of Joyce’s lifelong love and muse Nora.

Developmental productions of Himself and Nora were produced by the Old Globe Theatre; Hamilton Stage and the New York Musical Theatre Festival (NYMF). Additional developmental work was done with the James Joyce Center in Dublin, Ireland.

LISTINGS INFORMATION: Himself and Nora plays at the Minetta Lane Theatre, (18 Minetta Lane, between Sixth Avenue and MacDougal Street). Performances are Tuesdays at 7pm, Wednesdays at 2pm and 8pm, Thursdays at 8pm, Fridays at 8pm, Saturdays at 2pm and 8pm, and Sundays at 3pm. Tickets for Himself and Nora are $89 with premium and gold seating available. Tickets can be purchased by visiting www.HimselfandNoraMusical.com, www.Ticketmaster.com, or calling (800) 745-3000.