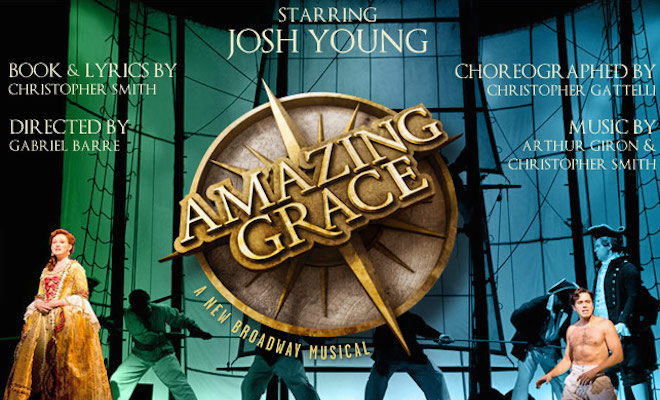 While there has been much buzz about which shows have been closing since the Tony Awards, we mustn’t forget Broadway’s newest arrivals. Among those opening is the new musical Amazing Grace, which began previews at the Nederlander Theatre on June25 and officially opened July 16.

This is not the first time Amazing Grace has appeared on the stage. It has previously played two separate productions. The show began at Goodspeed Musicals’ Norma Terris Theatre in Connecticut in 2012. The musical then played a pre-Broadway engagement at Chicago’s Bank of America Theatre last fall.

Amazing Grace is based on the true story of the song that bears the same name. The story follows a young Englishman named John Newton who “finds himself torn between following in the footsteps of his father – a slave trader – or embracing the more compassionate views of his childhood sweetheart.

Several of the cast members are quite seasoned Broadway performers. Josh Young plays the lead role of John Newton. Young previously appeared on Broadway in Jesus Christ Superstar for which he earned a Tony Award nomination for his portrayal of “Judas”. Young’s love interest is played by Erin Mackey who appeared on Broadway in Wicked, Chaplin, Sondheim on Sondheim, and Anything Goes. Rounding out the leading players Is Chuck Cooper who won a Tony Award for his role in Cy Coleman’s The Life.