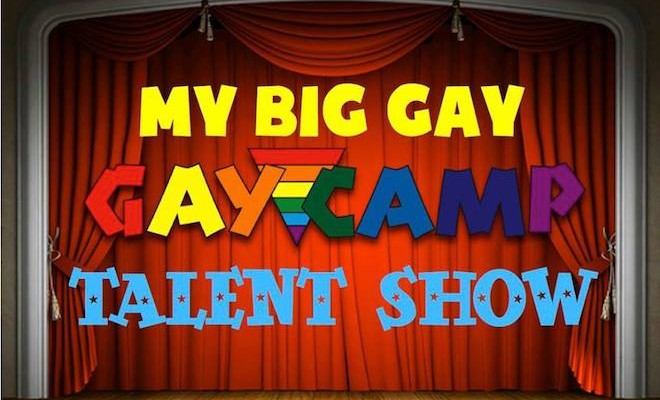 (New York) The creators of the hit comedy show Gay Camp are returning with a one-night-only cabaret titled My Big Gay ‘Gay Camp’ Talent Show, playing at the Duplex Cabaret Theatre on Monday, June 23 at 7pm.

Tickets are available on www.brownpapertickets.com.

For more information on My Big Gay ‘Gay Camp’ Talent Show, contact GayCampThePlay@gmail.com or visit our website at www.gaycamptheplay.com

My Big Gay ‘Gay Camp’ Talent Show is inspired by the play Gay Camp by Philip Mutz and Susan-Kate Heaney.

Gay Camp most recently played a run at the Duplex Cabaret Theatre from August 2013 – April 2014. Upcoming summer 2014 performances include the Crown and Anchor in Provincetown and Cherry’s on the Bay in Fire Island.

Gay Camp was initially part of the 2012 New York International Fringe Festival and ran from August 11 – August 22 at the HERE Mainstage Theatre in SoHo.

Following its initial run, Gay Camp received the Overall Excellence Award from FringeNYC for “Best Ensemble 2012”, and was selected as one of 19 shows (out of the 187 Fringe shows) to receive an extension as part of Fringe’s Encore Series (subsequently playing at the Players’ Theatre).

The production starred Mansfield, Urso, and Mutz playing more than a dozen different zany characters, and was also directed by Phillip Fazio.

Phillip Fazio graduated from The Boston Conservatory with a BFA in Musical Theatre and Directing. Regional Directing credits include Proof, Rent, Ragtime, Grey Gardens, Hidden in this Picture, West Side Story, Macbeth, The Last Five Years, Rocket Man, Cabaret, Smokey Joe’s Cafe, and Almost Maine. Assistant Director credits include the Center Theatre Group/Deaf West revival of Pippin (Directed by Tony Award Nominee Jeff Calhoun) at the Mark Taper Forum in Los Angeles and the New England Premiere of Take Me Out at Speakeasy Stage Company in Boston. New York City directing credits include Gay Camp for the 2012 Fringe Festival and subsequent Duplex run, Ben and Leslie Save the World and SuperBen for The Think Theater Project, and The Real Life with The Identity Theatre Company. Phillip is a member of the Lincoln Center Theatre Directors Lab and Actors’ Equity Association. (John Michael Dias – Performer) John played Frankie Valli on Broadway, in Chicago, Las Vegas, and all over the country in the first national tour of Jersey Boys. Other credits include: Ali Hakim/First national tour of Oklahoma!, Sonny/Grease at Fulton Opera House. He just released his debut album “Write This Way” available on iTunes and cd baby and holds a BFA from the Boston Conservatory. (Clinton Sherwood – Performer) Clinton is currently appearing on Broadway in The Book of Mormon. His training varies from commercial dance at EDGE and Millenium Dance Complex in LA, to studying acting with the Globe in London, to receiving a Certificate of Merit for piano performance from the California Music Association. He was a finalist in LA’s Next Great Stage Star and is also an avid teacher who has instructed nationally award winning show choirs and worked at the public schools in NYC. National Tours: Cats, West Side Story. (Dave Anthony Vogel – Performer) Dave has appeared as Mary Sunshine in Chicago (Broadway; National Tour). He has appeared regionally in Brigadoon, Man of La Mancha, and Urinetown. He holds a BFA in musical theatre from the Boston Conservatory. Mansfield was most recently seen in this year’s Duplex run of Gay Camp in NYC.  His previous Fringe endeavors include Gay Camp, The Penguin Tango at both Actors Playhouse and Theater Row, and Odysseus DOA where his cast was awarded “Best Ensemble”.  Other NYC credits: That Other Woman’s Child (NYMF) and Christmas Rappings.  Some regional favorites include 42nd Street (nat’l tour), Cabaret (Barter), and Romeo and Juliet (South Florida Shakes.)  Christian is a Long Island native with a BFA in Musical Theatre from the University of Miami.

Urso has served as director, actor, producer, guest artist, and dramaturg throughout the U.S.  Favorite roles include June in Gay Camp (Fringe; Duplex), Jules in Boom (Interplayers Theatre), Valentine in Twelfth Night (Manhattan Rep), Davey in Lieutenant of Inishmore (Strollers Theatre), and Philip in The Shape of Things (Actor’s Repertory Theatre).    Directing credits include regional productions of Chicago, Always…Patsy Cline, The Complete Works of Shakespeare (abridged), Steel Magnolias, The Producers, and New York productions of Red Light Winter, Fallen Angels, Kidnapping Laura Linney, and Never the Sinner. Ken holds a BFA in Acting from the University of Wisconsin-Stevens Point, and an MFA in Directing from the Actors Studio Drama School.

Susan-Kate Heaney is an actor and writer currently based out of Los Angeles. She is a graduate of New York University with a BFA in Drama. Most recently, she has been performing her comedic solo show Mop-oholic in New York and Los Angeles, at UCB, the Pit, iO West and Second City.   Susan-Kate is a co-creator and lead actor in comedic web series The Reality Whores. She has performed in theaters all around New York including Bank Street and Rattlestick. Recent work includes roles on Mercy (NBC) and Masters of Sex (Showtime).