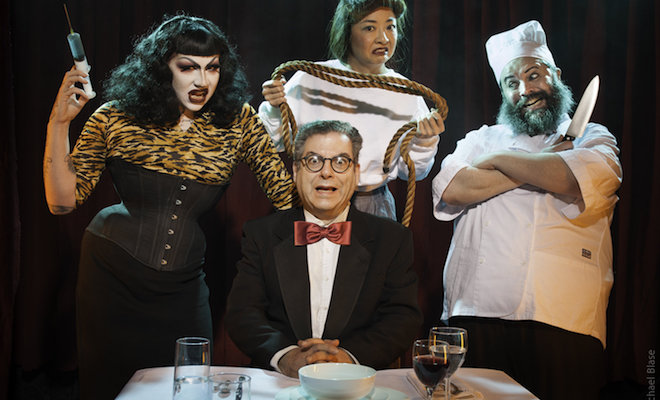 STARS OF THEATER, TV, FILM, TECH AND SOCIAL ACTIVISM WILL HONOR THE NEW YORK NIGHTLIFE FIXTURE BY HURLING INSULTS AT HIM IN A VICIOUS 90-MINUTES OF JAW DROPPING COMEDY WHERE ALL PROCEEDS WILL GO TO BENEFIT NYC’S VITAL LGBTQ COMMUNITY HEALTH CENTER, CALLEN–LORDE

(New York, NY – March 23) – Lug Nut Entertainment (Daniel DeMello and Nathaniel Nowak) in association with the world popular dating app SCRUFF, has announced that it will present FORK ON THE LEFT, KNIFE IN THE BACK: BROADWAY ROASTS MICHAEL MUSTO, a one night only charitable event, directed by Rachel Klein that will honor the pop culture journalist and New York Nightlife fixture Michael Musto along with Callen-Lorde, the vital community Health Center that provides sensitive, quality healthcare and related services targeted to New York’s lesbian, gay, bisexual, and transgender communities on Monday, May 22nd at 8PM at the Actors Temple, 339 West 47th Street. All ticket proceeds go to benefit Callen-Lorde. www.BroadwayRoast.com For tickets: https://www.telecharge.com/Off-Broadway/Broadway-Roasts-Michael-Musto/Overview

These stars of theater, television, film, journalism, tech and social activism will pay homage to Mr. Musto by mercilessly hurling a slew of absolutely cruel, vicious, & tasteless jokes at him (and at each other) – all of which he and they have agreed to endure in order to raise money for the vital services that Callen-Lorde offers to the LGBTQ community in NYC.

Michael Musto is the long-running writer known from the Village Voice (where he wrote the popular “La Dolce Musto” column for 29 years and is currently a correspondent), Out.com (where he writes the weekly “Musto! The Musical!” column), Paper, and the New York Times “Styles” section. He is awell known commentator on all things pop culture-related on CNN and CNN International, is a recurring panelist on Logo’s “Cocktails & Classics” movie show, and is a regular on Theater Talk. Musto–who’s won seven Glam awards for Best Nightlife Writer and was named to the Out 100 of influential LGBTs–has written four books–the non-fiction guide “Downtown,” the roman-a-clef “Manhattan on the Rocks,” and the collections “La Dolce Musto,” and “Fork on the Left, Knife in the Back.” He rides a bike even through blizzards, and is proud to say it’s a girl’s bike from K-Mart.

Erik Ransom (Lead Comedy Writer) is a composer, playwright, librettist and performer with a diverse body of work. His musical, More Than All the World, which is a musical inspired by Christopher Marlowe’s Edward II will be presented in the reading series at the Drama Desk award-winning York Theatre Company in March 2016. Erik’s smutty opus, GRINDR The Opera premiered in concert in Spring of 2014 and had a high profile staged reading hosted by Randy Jones (The original cowboy from the Village People) in April 2015. The reading was covered by The Daily Beast, The Guardian, Salon.com and the National Public Radio of the Republic of Ireland, among others, and was written up in 7 languages. Erik’s musical Coming: A Rock Musical of Biblical Proportions has been fully produced at The Prince Music Theatre in Philadelphia and Theatre 80 St. Marks in New York. He has a degree in classical music performance, and has studied with Metropolitan opera stars Jerome Hines and Enrico DiGiuseppe. His musical SAGA: The Ragnarok Opera was nominated for several Broadway World Philadelphia awards, and his musical Tragic Events has been performed at the Painted Bride Arts Center’s Ruckus Festival. Erik penned the lyrics for the recent Off-Broadway musical spectacular: The Anthem, which ran at The Culture Project’s Lynn Redgrave Theatre and he is slated to write for season two of the Emmy-nominated web-series, Tainted Dreams. He is also a two-time champion of Tune-in-Time, which is a monthly, timed, improvised musical theatre writing competition based in Manhattan.

Writer Matthew McLachlan is a comedy writer, Dramatist Guild Member, and resident playwright for Ruddy Productions. Most recently, his play Orionran Off-Broadway at Theatre Row on 42nd Street, having received an ever-rare positive review by Rex Reed. His play The Knowledge of Sin ran at the Hudson Guild Theater with an encore presentation and was nominated for Best Overall Play at the Venus Adonis Festival. His work Haywire was a finalist in the Manhattan Repertory Theater’s Fall One-Act Festival and has been adapted into a short film. His work Men’s Monthly closed out Ruddy Production’s sold out New Works Festival in 2015. In addition, Matthew was nominated for outstanding writing in a comedy at the LA WebFest for writing the entire third season to the highly acclaimed comedic web series, ADULTish. He has recently published a collection of his work entitled “A Collection of One Acts: and Other Things You May or May Not Enjoy” now available on Amazon.com.

Callen-Lorde is the global leader in LGBTQ healthcare. Since the days of Stonewall, the organization has been transforming lives in LGBTQ communities through excellent comprehensive care, provided free of judgment and regardless of ability to pay. In addition, it continuously pioneers research, advocacy and education to drive positive change around the world. Callen-Lorde Community Health Center provides sensitive, quality health care and related services targeted to New York’s lesbian, gay, bisexual, and transgender communities — in all their diversity — regardless of ability to pay. To further this mission,

Daniel Demello and Nathaniel Nowak have been producing together since 2014, when they launched NYC’s Extreme Egg Hunt and Easter Extravaganza, Full Bunny Contact. Nathaniel is a producing member of Psycho Clan, and has co-produced Nightmare: Horror Show, the critically acclaimed theatrical festival version of Timothy Haskell’s popular haunted house, the distorted winter wonderland Santastical and Northern Pole Territory. Daniel is a publicist representing a diverse list of companies and individuals in New York and abroad. The pair are taking a year off from producing Full Bunny Contact in order to stage this inaugural Broadway-centric roast and give back to their LGBTQ community in New York City. 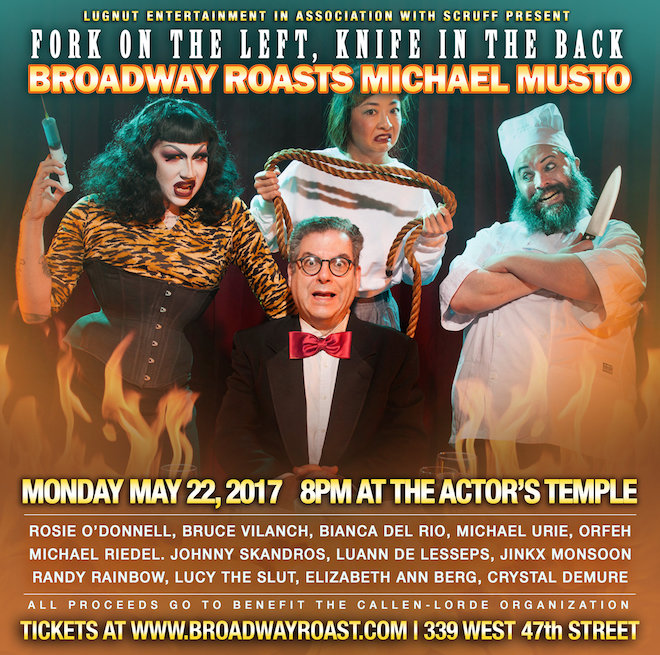