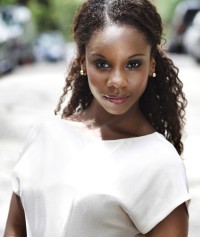 sometimes i can’t get everyone on the phone or in an in-person interview because they’re s’ dang busy.

khori petinaud is no exception. i had the opportunity and pleasure of meeting khori in a series of fosse reconstruction workshops that were dedicated to preserving and recording bob fosse’s brilliance for the verdon-fosse estate. led by valarie pettiford and lloyd culbreth and nicole fosse herself, we both went on an amazing journey and hers led to a very special place. it was then, though, that i knew that there was something special about her. she took the time to answer a few questions for me about her story.

the story: something incredible just happened to you. broadway called for you…twice in two months. describe that feeling. were you surprised at all?
khori: the feeling was something I couldn’t quite put into words. i was extremely surprised because last year was quite rough for me. even though I had just gotten an agent, i wasn’t receiving anycallbacks and around february i was really questioning whether this was the right profession for me. so to have everything start to happen all at once was so overwhelming and such an incredible blessing!

the story: how did you decide which opportunity to avail?

khori: well, anyone who’s known me since i started this “musical theater” thang will tell you that ‘lion king’ had always been my dream show. it was the first musical i’d ever seen, and from the moment rafiki opened her mouth  [when if first saw it], i was in tears! but i never dreamed I’d get the opportunity to be a part of something from the beginning and when I was offered ‘aladdin,’ I thought about the amazing opportunities that it would afford me!  getting to do a cast recording, the possibility of getting to perform on the tonys, not to mention the fact that I would get the opportunity to “create” my own character. i [still] love ’lion king’ and i have to believe if it’s Gods will, the opportunity would present itself again. besides, ‘lion king’ has proven it’s got staying power and i doubt it’s going anywhere!

thestory: were there ever any moments when you wanted to give up? if so, what pulled you through? (if not, what sustained you?)

khori: there were sooooo many moments! (we’d [actually] be here all day if i told you them all. but the one consistent thing that pulled me through was God. and He worked through so many different mediums at different times, most often through my family, friends, and colleagues who continued to affirm and uplift me in those moments of being ready to walk away from it all. my sweet momma sharon, my husband waynie, and my best friend grace at the helm of the “keep pushing, Gods got you” team!

the story: what is your favorite thing about this industry?

khori: my favorite thing would definitely be the comradery! i think about being in the non equity (non union) trenches for so long and all the friends i made! waiting for hours, sometimes without ever getting seen. waking up at ungodly times to sign a list that may or may not get thrown in the garbage. getting kicked out of empty rooms and forced into crowded hallways! geez! you can really get close with people! and I definitely did. we all supported one another! some of my best friends are the people i bonded with during those crazy auditions! and what brought us together was our love of dance and performing. with this industry, sharing that passion is always the seed that can lead to such fruitful friendships.

the story: you’re preparing to make your broadway debut. what’s next? have you thought about it?

khori: yikes! it’s funny you ask because i’m typically the person who’s already planning her next move before the ink dries! ha! i’m trying to shift away from that sort of thinking though because i’ve realized it prevents me from truly appreciating and living in the moment. however, i am who i am!!!! [i’d be lying if i said that] the thought hadn’t crossed my mind. but i think it’s because i’m so hopeful and know that there’s so much more that i want to do. i would definitely love to do some tv and film but more than anything FOSSE, FOSSE, FOSSE!! over the past few months, as you know because i met your wonderful fierce self there, i’ve been studying fosse technique with the incredible lloyd culbreath and valarie pettiford and i’ve just fallen head over heels in love with all things fosse! ideally, i’d love to do a show which allows me to do more of it. that would be a dream.

the story: with everything that this industry demands of you, how do you keep your sense of self? how do you stay centered and focused? what has prepared you most?

khori: i know i’ve said this before, but it’s so important to me:  God, my family, and my close friends are what keep me grounded and focused. it’s definitely a delicate balance but, because it can be easy to lose sight of what’s important especially when hustling towards a goal, it’s a necessary one. i’m so grateful to be surrounded in my personal life by people who remind to keep God first and to never forget where i’ve come from. i’d say hustling for so long is what prepared me the most because it kept me humble. i certainly thought my path to broadway would’ve been more direct but I’m so grateful for all the road blocks and challenges because i can appreciate this moment in my life so much more!

khori: love what you do because you’ll experience life at its best!

the story: a lot of people look at your current situation and would love to be in your position. what do you have to tell those people?

khori: accept that your path has been beautifully paved just for you and it leads to all you desire and dream for your life.  if i’ve learned anything from this whirlwind it would be that everything — and I meaneverything – you go through is for a reason and that everyone needs to experience different things in order to be ready to step into the place where they are meant to be. some may travel a more direct path, others may need a more roundabout way, but trust and believe, it’s all working out for your benefit. never compare the path you are on to someone else’s. it will always end in disappointment. there is enough room in this industry for everyone and i truly believe that the only people who don’t make it are those who stop trying!

the story: what can you tell us about ‘aladdin?’

khori: i can’t say much as i don’t want to spoil it

but I will tell you this: IT. WILL. BE. EPIC!!! it will be all that you can hope to expect from a disney production plus some! not to mention the cast and creative team are bananas!!!!!!! i’m sooooo excited for the world to see this amazing production!

khori petinaud began dancing at 13 and has never looked back since. she studied at russell’s school of ballet in chantilly, va, dance theater of harlem, north carolina school of the arts, alvin ailey american dance theater and received her bfa in dance from nyu’s tisch school of the arts. she has danced all over the world working with many choreographers that include aszure barton, andrea miller, benoit swan pouffer, donald byrd, nathan trice, and larry keigwin as a member of the steps repertory ensemble. she has also been seen in productions of ‘sweet charity’ (engemen theater), ‘evita’ (flat rock playhouse), ‘mary poppins’ (MUNY). and the national tour of ‘the color purple’ as a featured dancer and the role of olivia. her most beloved role has been the role of wife to her awesome husband waynie!!!
find her on facebook (khori petinaud), twitter (@khorirpetinaud), and instagram (@kmr8787).
Related ItemsactorActressaladdinandrea millerartsaszure bartonballetbenoit swan pouffierBroadwaybusinesschantillycharitydance theater of harlemdancerdebutdisney theatrical productionsdonald byrdengemen theaterentertainerEvitaflat rockgodindustrykhorikhori petinaudkhorirpetinaudlarry keigwinlion kingmary poppinsmunymusical theaternathan tricenew yorknycoriginal castperformerperformingpetinaudsingersteps rep ensemblesteps repertory ensemblesweet charitytonys

← Previous Story Margo Seibert: Tamar of the River/Rocky Interview
Next Story → “PETER AND THE STARCATCHER” BEGINS ITS FINAL WEEKS