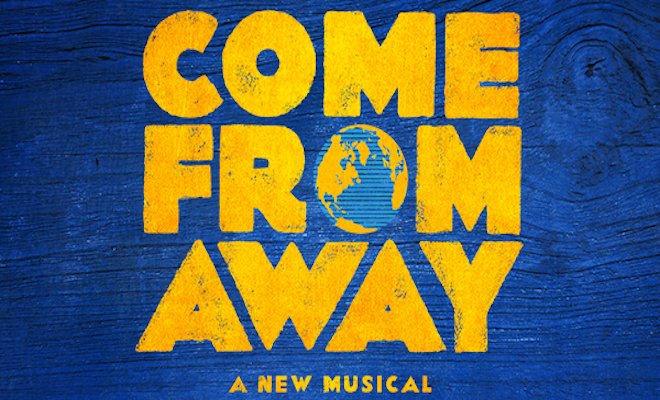 Benefit Concert Performances of ‘Come From Away’

(New York, NY) The producers of COME FROM AWAY announced today that they will honor the residents of Newfoundland and Labrador and the “come from aways” whose lives inspired the new musical COME FROM AWAY with two special benefit concert performances at Gander’s hockey arena, The Steele Community Centre (155 Airport Boulevard, Gander, NL), on Saturday, October 29, 2016 at 3pm (NDT) and 8pm (NDT). The benefit concerts, presented in association with the Town of Gander, NL, will star the cast of the Broadway and Toronto productions of COME FROM AWAY. Tickets are now on sale for the two benefit concert performances of COME FROM AWAY in Gander, NL and are $20. For reservations and more information please visit www.gandercanada.tix.com, or contact the Steele Community Centre box office at 709-651-5931 or in person between the hours of 10am (NDT) and 5:30pm (NDT), Monday through Friday.

100% of the revenue from the special benefit concert performances will go to local Newfoundland charities that support the affected communities.

Claude Elliott, who has been the Mayor of Gander, Newfoundland and Labrador since March 6, 1996, said “The events of September 11, 2001 forever changed how Gander and surrounding communities are viewed on the global stage. Now our communities have taken on another role of a different kind, this time on a Broadway stage! For those who did not witness the extraordinary acts of kindness, the performance of Come from Away in Gander will highlight the many selfless acts made by residents during that trying time. For those who were a part of the efforts to accommodate over 6,600 unexpected visitors, the performance will demonstrate the impact of their hospitality. As a community, we are excited that the people of Gander and surrounding areas will be able to see a production that showcases how the power of love and human decency, even in the midst of darkness, can bring light and restore our faith in mankind. We are very thankful to everyone who worked on this production to bring it to fruition.”

“When we first heard about what had happened in Gander, we were drawn to this story about seeing humanity at its best in the wake of seeing it at its worst,” said Irene Sankoff, “and when we first went to Newfoundland to interview the people who are portrayed in COME FROM AWAY, we were overwhelmed by the same generosity that the come from aways experienced in 2001.”

“Since we started writing COME FROM AWAY we were focused on creating a musical that honored the people we met – as well as the truth of what happened over those five days.” said David Hein, “With each reading, workshop and production the project grew in a way we never could have expected, so when plans were being made to bring the show to Broadway, Irene and I felt strongly that our friends in Newfoundland should be given the chance to experience our telling of their story first. And what better way to do that than with a benefit concert?”

In a heartbeat, 38 planes and 6,579 passengers were forced to land in Gander, Newfoundland, doubling the population of one small town on the edge of the world.

COME FROM AWAY was originally co-produced in 2015 by La Jolla Playhouse and Seattle Repertory Theater. COME FROM AWAY (NAMT Festival 2013) was originally developed at the Canadian Music Theatre Project, Michael Rubinoff Producer, Sheridan College in Oakville, Ontario, Canada and was further developed at Goodspeed Musicals’ Festival of New Artists, in East Haddam, CT. The Canada Council for the Arts, The Ontario Arts Council, Steve and Paula Reynolds and The Fifth Avenue Theatre, Seattle WA also provided development support.