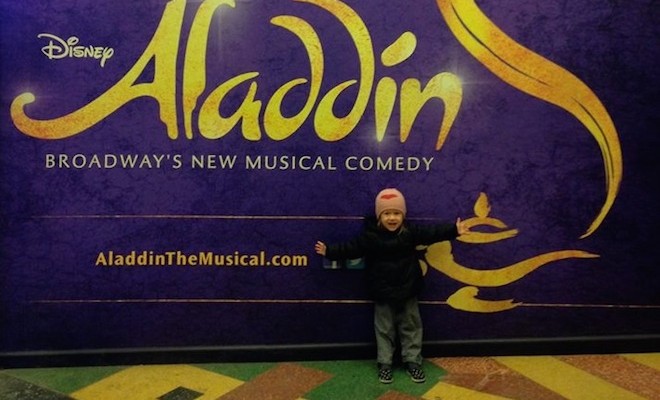 BEING A SHOW BIZ DAD A few days before Father’s Day, I sat down with Aladdin’s Andrew Cao.  Andrew has lived in New York City for ten years now.  Since his move from the Midwest, he’s gotten married on a rooftop, has been in three Broadway shows, has had a beautiful daughter, Lua, and one more is on the way.  Here are some of his thoughts on being a father and working on the Great White Way.

How did you celebrate your first Father’s Day?

I actually don’t remember.  The last two and half years have kind of been a blur.  I know I had a show. I was doing Anything Goes at the time.  Actually, Lua was born during and because of that show. My wife and I thought, “Well, we made it to Broadway, and the show seems to be doing pretty well, let’s start our family.” Ya know, like you do.

What does Lua think of her dad being in Aladdin?  Does she come to the show often?

Lua thinks what I do is pretty cool.  She loves Aladdin, and can pretty much reenact the entire show.  She loves doing the dance with silks from “Arabian Nights.”  She loves going backstage and seeing the jewels on the “Cave of Wonders” set.  Whenever she comes, she wants to see “Tasty.”  That’s what she calls the actress who has the line “Still I think he’s rather tasty” in “One Jump Ahead.”

What is the most rewarding aspect of being a dad and working on the B’way?

Right now I am in a show that kids love, and I have a kid.  How lucky am I?  I think that’s awesome and I am so lucky I get to share this with her.

How has your career changed since having a family?

For me what has changed is you stop thinking about “what is good for me and my career,” and more of “what is good for me and my family.”  There’s not a lot of stability in our business. When you are supporting a wife and children, it’s a game changer.  You can get offers for new and exciting projects, but there is no guarantee that it won’t close. So, when you are in a successful Broadway show already, you have to take that into consideration. You have mouths to feed.  I also don’t really want to do out of town gigs because when you have babies, you don’t want to miss a thing.

I actually asked her this question earlier today.  I said, “Lua pick three words to describe daddy.” The first word she picked was “happy.”  She then said “four,” and the third word was “poopy.”  Happy, four, and poopy- those are the words she came up with.

As for me describing Lua?  Oh man, all the good ones.  Awesome, kind, and hilarious.  She is very, very kind.  I don’t know if it is nature or nurture, but she is just so kind.  At the park, she has so much consideration for other kids.  She is very patient and considerate of others.  And, she is just hilarious.

Ken has served as director, actor, guest artist and dramaturg internationally and throughout the United States. He received his BFA in Acting from the University of Wisconsin- Stevens Point and his MFA in directing from the Actors Studio Drama School. www.kenurso.com