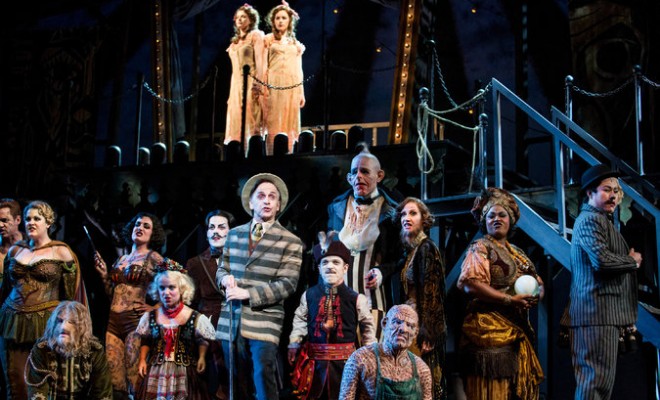 BEHIND-THE-SCENES BUZZ: WILL “SIDE SHOW” MAKE A RETURN TO BROADWAY?

Side Show, the short lived 1998 musical, recently ended its run at The Kennedy Center, in a revised production that was a collaboration between The Kennedy Center and LaJolla Playhouse. This regional revival was both commercially and critically successful, and as such, it has many theatergoers wondering if Side Show will make a return to New York. While there is no official word of a Broadway transfer, there are whispers within the theatre community of details being discussed and of hope for a successful move.

Side Show features a score by Henry Kreiger (Dreamgirls), and book and lyrics by Bill Russell (Elegies for Angels…). It tells the story of two conjoined twins who become internationally famous circus performers in the 1930s. The original Broadway production opened in New York on October 16, 1997 at the Richard Rodgers Theatre. It starred Emily Skinner and Alice Ripley as conjoined twins Daisy and Violet Hilton, and also featured Norm Lewis, Hugh Panaro, Jeff McCarthy, and Ken Jennings. The production was nominated for 4 Tony Awards, and was the first (and only) time two actresses were co-nominated for Best Actress in A Musical. The original production closed on January 4, 1998, having played 91 performances and 31 previews.

While viewed as a “flop” at the time, Side Show gained popularity in the years after its close, thanks to its original cast recording and the loyal fans who had supported it while it was running. It has since become a cult classic among musical theatre fans, with two of its duets, “Who Will Love Me As I Am?” and “I Will Never Leave You,” becoming popularly performed staples of female musical theatre singers.

The 2013/14 Kennedy Center/LaJolla revival was directed by Bill Condon (Dreamgirls film), and choreographed by Anthony Van Laast. It starred Erin Davie and Emily Padgett as Violet and Daisy Hilton respectively, and also featured Ryan Silverman, Matthew Hyzdik, Robert Joy, and David St. Louis. According to its creators, this revival took a “darker approach” to the material, and tried to frame the story within more of a historical context than previous incarnations did, as well as revealing additional background information about the twins. This latest version also featured several new additions to the score.

The Kennedy Center run ended on July 13, 2014. While there has been no official word of plans for a Broadway production, the behind-the-scenes buzz is enough to suggest that maybe we haven’t seen the last of Daisy and Violet.