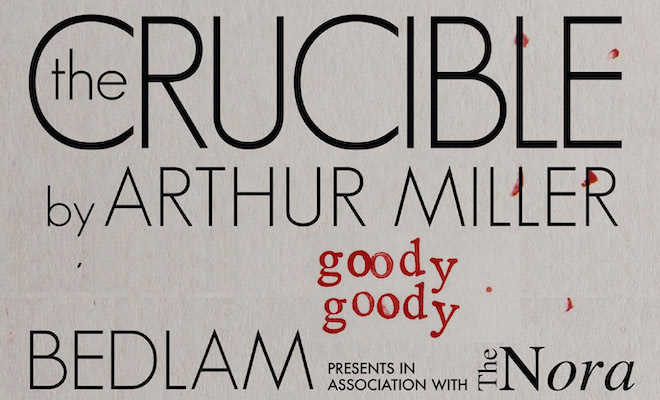 BEDLAM PRESENTS IN ASSOCIATION WITH THE NORA THEATRE COMPANY

LIMITED 7-WEEK RUN THROUGH DECEMBER 29 AT THE CONNELLY THEATER

The Crucible is a 1953 play by American playwright Arthur Miller. It is a dramatized and partially fictionalized story of the Salem witch trials that took place in the Massachusetts Bay Colony during 1692–93. Miller wrote the play as an allegory for McCarthyism, when the United States government persecuted people accused of being communists. Miller was questioned by the House of Representatives’ Committee on Un-American Activities in 1956 and convicted of contempt of Congress for refusing to identify others present at meetings he had attended.

Arthur Miller (1915-2005) was born in New York City and studied at the University of Michigan. His plays include The Man Who Had All The Luck (1944), All My Sons (1947), Death Of A Salesman(1949), The Crucible (1953), A View From The Bridge and A Memory Of Two Mondays (1955), After The Fall (1964), Incident At Vichy (1964), The Price (1968), The Creation Of The World And Other Business (1972), The Archbishop’s Ceiling (1977), The American Clock (1980) and Playing For Time. Later plays include The Ride Down Mt. Morgan (1991), The Last Yankee (1993), Broken Glass (1994),Mr. Peters’ Connections (1998), Resurrection Blues (2002), and Finishing The Picture (2004). Other works include Focus, a novel (1945); The Misfits, a screenplay (1960), and the texts for In Russia(1969), In the Country (1977), and Chinese Encounters (1979) three books in collaboration with his wife, photographer Inge Morath. Memoirs include Salesman in Beijing (1984) and Timebends, an autobiography (1988). Short fiction includes the collection I Don’t Need You Anymore (1967), the novella Homely Girl, a Life (1995) and Presence: Stories (2007). He was awarded the Avery Hopwood Award for Playwriting at University of Michigan in 1936. He twice won the New York Drama Critics Circle Award, received two Emmy awards and three Tony Awards for his plays, as well as a Tony Award for Lifetime Achievement. He also won an Obie award, a BBC Best Play Award, the George Foster Peabody Award, a Gold Medal for Drama from the National Institute of Arts and Letters, the Literary Lion Award from the New York Public Library, the John F. Kennedy Lifetime Achievement Award, and the Algur Meadows Award. He was named Jefferson Lecturer for the National Endowment for the Humanities in 2001. He was awarded the 2002 Prince of Asturias Award for Letters and the 2003 Jerusalem Prize. He received honorary degrees from Oxford University and Harvard University and was awarded the Prix Moliere of the French theatre, the Dorothy and Lillian Gish Lifetime Achievement Award, and the Pulitzer Prize.

Committed to the immediacy of the relationship between the actor and the audience, BEDLAMcreates works of theatre that reinvigorate traditional forms in a flexible, raw space, collapsing aesthetic distance and bringing its viewers into direct contact with the dangers and delicacies of life. In this new, fresh, active environment storytelling becomes paramount and the result is a kinetic experience of shared empathy.

WHAT THE CRITICS ARE SAYING ABOUT BEDLAM

“BEDLAM is a band of gifted unknowns who can make theatrical magic in an empty room. No theater troupe in America is doing more creative classical revivals. I believe Eric Tucker is this Country’s most talented director of classic Theatre.  Eric is a kind of genius at making theatrical magic in black-box theater spaces.” – Wall Street Journal, Terry Teachout

“No troupe in New York these days rides the storytelling momentum of theater more resourcefully or enthusiastically than BEDLAM.” – The New York Times, Ben Brantley

“BEDLAM injects fresh blood and ideas into the theatre community and is all about jolting the audience out of complacency. Eric Tucker’s ability to peel away the layers while supporting the emotionalism of a performer makes you see things with new and less cynical eyes.” – Hilton Als, The New Yorker

“Bedlam has made a name for itself with high-energy, small-ensemble reinvigorated classics.”– Sara Holdren, New York Magazine