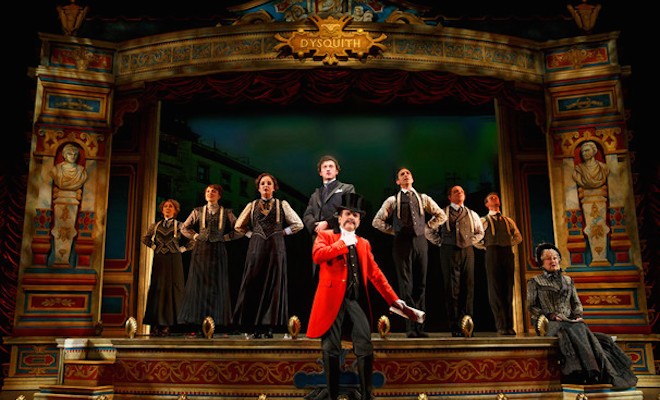 AN UNEXPECTED CHAMPION OF THE “TRADITIONAL MUSICAL”

On May 20, 2014, an article was published in the Hollywood Reporter entitled “Tonys: ‘Bridges of Madison County’ And the Traditional Broadway Musical’s Imperiled Future.” This article spoke about how the impending closing notice for Bridges sounded a death knell for the “traditional Broadway musical.” The author went on to describe the history of the evolution of the Broadway musical and interviewed the musical’s star, Kelli O’Hara, on the subject of the changing landscape of Broadway.

However, there is one detail he forgot to mention. The article boldly states,

This, my friends, is simply not true. I don’t know whether it was simply an oversight, or a deliberate omission, but there is one musical this season with an original score that WAS nominated for multiple Tonys and is arguably more traditional in style than Bridges was: A Gentleman’s Guide to Love and Murder.

A Gentleman’s Guide to Love and Murder, (for those of you who have yet to see it, and if you haven’t, I URGE you to run to the Walter Kerr Theatre immediately), is the story of Monty Navarro, a “commoner” living in London who discovers he is the heir to a title of nobility. The only obstacle standing in his way is the fact that he’s 9th in line for this inheritance. One need only look to the show’s title to figure out how he gets there. The score of the musical (composed by Steven Lutvak, lyrics by Lutvak and Robert L. Freedman) is completely original, and written in the styles of operetta and traditional musical theatre. It is the kind of rapturously comedic score that could be a not-so distant cousin to both the operettas of Gilbert and Sullivan and the musicals of Rodgers and Hammerstein. Its cast is filled with hard working theatre professionals, none of whom (besides Jefferson Mays, who brilliantly plays multiple roles to comedic effect), is a “name” in the theatre world (yet…). It is very much a “traditional musical” in form as well as content, and when I saw it, it warmed my heart with its nods to the roots of musical theatre, but it also impressed me with how clever it was throughout. And while it doesn’t have a huge fan following, it opened to critical raves this fall, received the most Tony nominations of any new musical this season, and has been seeing its box office figures climb in the past couple of weeks.

I make these points because GGLAM (as it is affectionately called), is the musical that no one (outside of the critics and its small but mighty fan base) is making a big fuss over. People were all but wailing in the streets and throwing riots when Bridges closed, as they bemoaned the death of the “traditional musical,” but none of these people mentioned that there was an even more traditional musical comedy running just a few blocks away from Bridges. Why not celebrate the musical that is still running which points back to a glorious era in musical theatre and that, if commercially successful, could help re-popularize traditional musicals? Why is no one mentioning this?

If you claim to be a fan of musicals, and bemoan the lack of traditional musicals in the current season, you need to go see A Gentleman’s Guide to Love and Murder. For the sake of all of us. Yes, The Bridges of Madison County closed. But if you truly want a return of traditional musical theatre writing, don’t just sit and cry over the loss of Bridges. Go see GGLAM, and help it be successful so producers will see that audiences DO want to see more of these “traditional” shows.