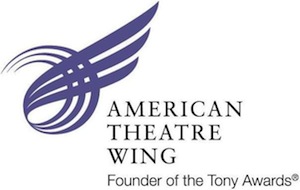 Grants for the 2013 cycle in the amount of $10,000 each will be distributed for general operating support to these companies which, according to grant guidelines, have been in operation at least five, but not more than fifteen years, have articulated a distinctive mission, cultivated an audience, and nurtured a community of artists in ways that strengthen and demonstrate the quality, diversity, and dynamism of American theatre.

“The ten recipients of this year’s National Theatre Company Grants prove yet again that exciting theatre is being created and produced in communities large and small all across the country,” Heather Hitchens, Executive Director of the American Theatre Wing, commented.  “These companies have demonstrated tremendous courage and creativity, and are vital to the cultural and civic fabric of their communities.  All of us at The Wing are proud to recognize their outstanding work.”

The American Theatre Wing has long shown its dedication to not-for-profit theatres through its Theatre Company Grants Program. After many years during which eligibility was restricted to New York City companies, 2010 marked a significant change in the granting of The Wing, resulting from extensive review by the organization’s Board of Trustees.  The ATW Grants have distributed some $3 million dollars over the past 55 years.  For more information on the ATW’s National Theatre Company Grants, visit: americantheatrewing.org/grants/. The application period for 2013 grants will open in the spring of next year.

In 2012, the American Theatre Wing (William Ivey Long, Chairman, Board of Trustees; Heather Hitchens, Executive Director) celebrated 95 years of service to the American Theatre. For nearly a century, the mission of the Wing has been to serve and support the theatre by celebrating excellence, nurturing the public’s appreciation of theatre, and providing unique educational and access opportunities for both practitioners and audiences.

Best known for creating The Antoinette Perry “Tony” Awards®, now presented with The Broadway League, the Wing has developed the best-known national platform for the recognition of theatrical achievement on Broadway. Yet the Wing’s reach extends beyond Broadway and beyond New York, with educational and media work that offers the very best in theatre to people around the world. In addition to its various media programs and a host of other online resources, The Wing sponsors many activities, all dedicated to recognizing excellence and supporting education in theatre.  The Wing’s programs include the Theatre Intern Group, a career development program for young professionals; SpringboardNYC, a two-week college-to-career boot camp for young performers moving to NYC; and the Jonathan Larson® Grants, given annually to honor emerging composers, lyricists and book writers.

Visitors to americantheatrewing.org can listen to, watch or download from the Wing’s extensive media collection, and learn more about all of its programming for students, aspiring and working professionals, and audiences who want to learn more about the making of theatre. Follow the Wing on Facebook.com/TheAmericanTheatreWing and Twitter.com/TheWing.