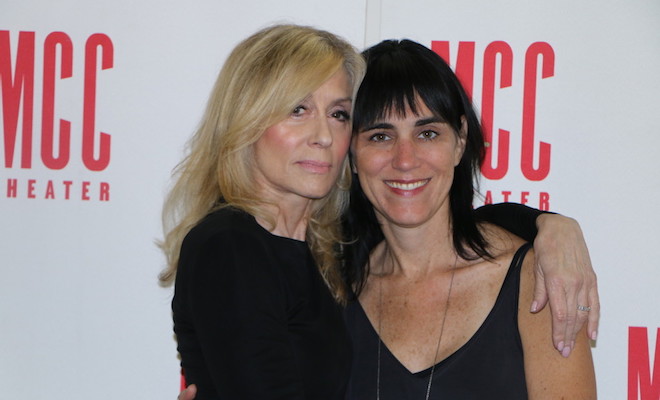 ‘All The Ways to Say I Love You’ Extends

New York, NY (September 13, 2016) – MCC THEATER (Robert LuPone, Bernard Telsey, William Cantler, Artistic Directors; Blake West, Executive Director) has announced a one-week extension—now through October 16, 2016— for the first production of its 30th Anniversary Season, All The Ways To Say I Love You, a new play by Neil LaBute, directed by Leigh Silverman and starring Tony® and Emmy® Award winner Judith Light in a one-woman tour de force. The production, which brings together three of MCC’s favorite longtime collaborators, began previews on September 6, 2016 at the Lucille Lortel Theatre (121 Christopher Street) ahead of its Opening Night on September 28. It was previously scheduled through October 9. For tickets and info, visit www.mcctheater.org.
All The Ways To Say I Love You marks Neil LaBute’s 10th full-length play produced by MCC in a 15-year collaboration that includes some of the playwright’s seminal works: Fat Pig, The Mercy Seat, The Distance from Here, and reasons to be pretty, the latter of which transferred to Broadway and received a Tony nomination for Best Play. Judith Light, an MCC mainstay onstage and off, returns to MCC following her performances in Margaret Edson’s Wit in 1999 and Laura Wade’s Colder Than Here in 2005, as well as having been honored at MCC’s annual Miscast Gala in 2013. She is currently celebrating an Emmy® nomination for her work in the groundbreaking Amazon series “Transparent.” Director Leigh Silverman was last seen at MCC with Coraline in 2009.
Mrs. Johnson is a high school English teacher and guidance counselor in a long-time, loving marriage. As she recounts her experiences with a favored student from her past, Mrs. Johnson slowly reveals the truth that is hidden just beneath the surface details of her life. All The Ways To Say I Love You is a solo play about love, hard choices, and the cost of fulfilling an all-consuming desire.
The creative team for All The Ways To Say I Love You includes scenic design by Rachel Hauck, costumes by Emily Rebholz, lighting by Matt Frey, and sound by Bart Fasbender. Casting by Telsey + Company.
In celebration of its 30th Anniversary Season, MCC Theater has many ways audiences can join for the 16/17 season including $30 tickets to preview performances, its $30 Under 30 program and new $120 four-show Preview Subscription. Subscriptions can be purchased by calling 212-352-3101 or visiting mcctheater.org.
The 2016-17 MCC Theater season will also include the NYC premiere of MCC’s third musical ever, Ride the Cyclone (November 9 – December 18, 2016), direct from its hit run at Chicago Shakespeare Theater, featuring book, music and lyrics by Jacob Richmond and Brooke Maxwell and direction by Rachel Rockwell; the NYC premiere of Anna Jordan’s Bruntwood Prize-winning play YEN (January 12 – February 19, 2016) directed by OBIE winner Trip Cullman, the latest play to make its American premiere at MCC after making its world premiere at the Royal Court following The Pride and The Nether; and the NYC playwriting and stage acting debut of Emmy-nominated “Friends” star Matthew Perry who wrote and will star in his play The End of Longing (May 18 – June 24, 2017), directed by Lindsay Posner, following its hit London run. In addition to its mainstage premieres, MCC will continue its PlayLabs series and education initiatives throughout the season. More information on this year’s PlayLabs, which showcase in-progress works by emerging playwrights and invite audiences into the development process, is available at www.mcctheater.org.
MCC Theater broke ground on its first permanent home— a two-theater complex on West 52nd Street and 10th Avenue—on March 22, 2016. Set to open in 2018, the space will unite MCC’s diverse roster of programs under one roof for the first time in the company’s three-decade history. The new facility will also allow MCC to expand its programming and establish it as a cultural anchor within the Clinton neighborhood. The $35 million project is funded by a public-private partnership between the Theater and the City of New York. The campaign has raised $30.5 million to-date.

About MCC Theater
MCC is one of New York’s leading nonprofit Off-Broadway companies, driven by a mission to provoke conversations that have never happened and otherwise never would. Founded in 1986 as a collective of artists leading peer-based classes to support their own development as actors, writers and directors, the tenets of collaboration, education, and community are at the core of MCC Theater’s programming. One of the only theaters in the country led continuously by its founders, Artistic Directors Robert LuPone, Bernard Telsey, and William Cantler, MCC fulfills its mission through the production of world, American, and New York premiere plays and musicals that challenge artists and audiences to confront contemporary personal and social issues, and robust playwright development and education initiatives that foster the next generation of theater artists and students.

Plays and musicals developed by the company have gone on to stagings around the globe. Notable productions over the course of the company’s 30-year history include Robert Askins’ Hand to God, nominated for five Tony Awards and transferred to London’s West End; Sharr White’s The Other Place, starring Laurie Metcalf; The Submission by Jeff Talbot, winner of the inaugural Laurents/Hatcher Foundation Award for new American plays; Bryony Lavery’s Frozen, a 2004 Tony nominee for Best play and winner for Brian F. O’Byrne’s performance; Wit by Margaret Edson, winner of the Pulitzer Prize for Drama in 1999; the classic cult musical Carrie, which has gone on to international productions since the Theater’s extensive redevelopment work and staging in 2012, the first in more than two decades; and eight plays by Playwright-in-Residence Neil LaBute, including Fat Pig; reasons to be pretty, a 2009 Tony nominee for Best Play; and Reasons to Be Happy. Blake West joined the company in 2006 as Executive Director. MCC will open its first permanent home in 2018 in Manhattan’s Clinton neighborhood, unifying the company’s activities under one roof for the first time and expanding its producing, artist development, and education programming. The Theater is currently in the midst of a $35 million campaign to support its expansion and growing artistic operations, with $30 million raised to-date.