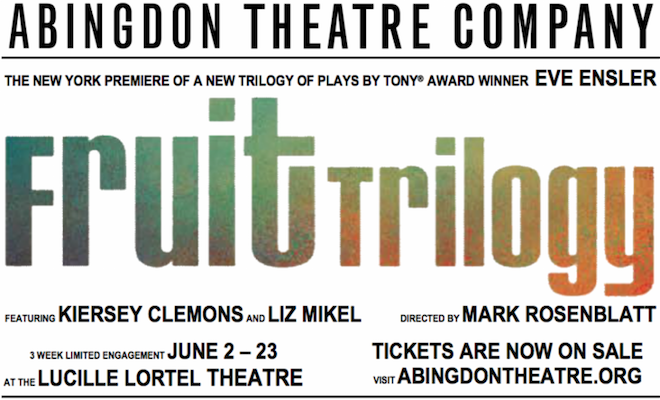 In this pivotal moment when women around the world have risen up to tell their stories and stand up against violence, Eve Ensler’s timely Fruit Trilogy is three short plays that give a voice to defiant, ordinary women: Pomegranate – two women for sale, another morning on the shelf; Avocado – a young woman on her chaotic, shocking journey toward freedom; and Coconut – from the bliss of her bathroom, a woman connects with the one thing she has never fully owned … her body. Woven together with dark humor and heightened theatricality, Fruit Trilogy explores the humanity behind the headlines.

“I am thrilled and honored that Abingdon Theatre Company is premiering Fruit Trilogy in New York with such brilliant actors Liz Mikel and Kiersey Clemons,” says playwright Eve Ensler. “It couldn’t be a better moment to tell the stories of women who have become disembodied through commodification and violation, who are struggling and rising with wit, imagination, humor and pure life force to find their way home.”

After select performances, V-Day, the global activist movement to end violence against all women and girls founded by Ensler, will host a talkback series. The series will be led by activists, artists, and thinkers; participating in discussions surrounding the play’s central themes on the commodification and ownership of women’s bodies along with returning to and learning to love the body.

LISTING INFORMATION: Fruit Trilogy June 2 – 23 at the Lucille Lortel Theatre (121 Christopher Street, NYC), opening night is June 7 at 7PM. Performances are Tuesday – Thursday at 7PM, Friday and Saturday at 8PM, with matinees on Saturday at 3PM and Sunday at 2PM. There is an added performance on Monday, June 4 at 7PM. (There is no matinee on Saturday 6/2.) Tickets are $65 and available at abingdontheatre.org calling Ovationtix.com at 212-352-3101. Premium seating is available. For more information about Fruit Trilogy, season subscriptions and group bookings visit abingdontheatre.org or call 212-868-2055.

KIERSEY CLEMONS (Actor). One of the most respected actors of her generation, actress, and musician Kiersey Clemons has quickly become known for her diverse and captivating on-screen presence. Clemons recently made headlines when she landed the coveted female lead opposite Ezra Miller in Warner Bros’ The Flash. Sundance darling, indie-drama Hearts Beat Loud, hits theaters nationwide this June, where Clemons stars opposite Nick Offerman. Clemons received rave reviews as the film closed the 2018 Sundance Film Festival. Clemons leads the cast in J.D Diller’s Universal/Blumhouse thriller film Sweetheart, a survival-thriller pic. Additionally, in 2018, Kiersey will star on Season 4 of the TBS hit tv series, “Angie Tribeca,” as Maria Charo. 2017 saw Clemons star in Sony Picture’s sequel of the 1990 thriller Flatliners and she also starred opposite Jeff Bridges and Kate Beckinsale in director Marc Webb’s film for Amazon entitled, The Only Boy Living In New York. Clemons has risen to the ranks of young female leading ladies following her break-out role in the Sundance hit, Dope, which was nominated at multiple festivals, including Cannes. She followed that up, alongside Seth Rogan, Zac Efron, Rose Bryne and Chloe Moretz, in Neighbors 2: Sorority Rising. Aside from her work in film, Clemons is also making her mark in television, having recurred on the Golden Globe and Emmy Award winning Amazon series “Transparent.” Other recent TV credits include Steven Spielberg’s “Extant” (CBS) alongside Halle Berry and Fox’s “New Girl.” Clemons can also be seen on the Netflix original series “Easy,” a sex-positive anthology with genuine portrayals of modern relationships. In addition to acting, Clemons is a classically trained and talented musician. She has collaborated with Grammy Award-winning producer/artist Pharrell Williams on multiple-tracks and her vocals can be heard in a handful of projects including DOPE and “Transparent.” Kiersey has teamed up with the Sierra Club to help promote, preserve and protect our national parks and beaches. Clemons also lends her voice to support women’s organizations, helping to educate and take action on pressing issues facing women and girls worldwide.

LIZ MIKEL (Actor) received rave reviews in both her Off-Broadway and Broadway debuts as the all-knowing muse/madam, Hetaira, in the Douglas Carter Beane musical, Lysistrata Jones. Liz was honored to be personally invited by Eve Ensler to participate in the star-studded 10th anniversary of The Vagina Monologues. Last fall, Mikel joined Ensler again for the world premiere of her newest comedy, O.P.C., at the Tony Award winning American Repertory Theater. Her recurring role as Corrina Williams on NBC’s Emmy-winning series “Friday Night Lights,” tugged the heartstrings of viewers and critics alike. She had audiences laughing in the Martin Lawrence blockbuster, Welcome Home Roscoe Jenkins, playing the wife of the late Michael Clark Duncan. She was cast by Ben Stiller, and body slammed him, in The Secret Life of Walter Mitty. Director Tate Taylor Life handpicked Mikel to portray Gertrude Saunders in the James Brown biopic, Get On Up. Ms. Mikel has toured both nationally and abroad and has worked alongside some of the industry’s biggest celebrities. Internationally, Liz starred in the blues musical, Blind Lemon Blues, which had it’s world premiere at the Forum Meyrin in Geneva Switzerland, and the Festival de L’Imaginaire at the Maison des Cultures du Monde in Paris France. As a vocalist, Liz has opened for Erykah Badu, Branford Marsalis, Issac Hayes, Joan Rivers, Gennifer Flowers, Chrisette Michele, Ledisi and her friend, blues legend, Lucky Peterson. Jim Caruso added Liz’s powerhouse prowess to his “Best Of Cast Party” at New York’s Town Hall alongside Jane Monheit, Lisa Lampanelli, Linda Lavin and Marilyn Maye. A multifaceted artist that has been a staple in the Dallas, Texas Arts scene for more than 20 years, Liz has been lauded and recognized for her artistic achievements by D Magazine, Dallas Theater Critics Forum, Dallas Observer, Dallas Voice Reader’s Choice Award, The Sankofa Award, Leon Rabin Award, The Column Awards, Black Women In Jazz and was a nominee for Dallas Morning News’ 2012 Texan Of The Year. She was selected by The Dallas Observer as one of the city’s 30 People to Watch in 2013, and was featured on the cover. She is a proud member of the Dee and Hal Brierley Resident Acting Company at Dallas Theater Center. Liz is honored to have received the 2015 Lunt Fontanne Fellowship by the Ten Chimneys Foundation, and attended a weeklong intensive workshop with Master Teacher, Phylicia Rashad. She is a proud member of Actors’ Equity Association and Screen Actor’s Guild. A dedicated mother and grandmother, Liz thanks her family, both biological and chosen for their support and love! Facebook: Ms. Liz Mikel. Instagram: @miz_lyzz. Twitter: @mizlyzz

EVE ENSLER (Playwright) is the Tony Award winning playwright, activist, performer and author of the theatrical phenomenon and Obie Award winning, The Vagina Monologues, which has been published in 48 languages and performed in over 140 countries. Ms. Ensler’s plays include Floating Rhoda and the Glue Man, Extraordinary Measures, Necessary Targets, OPC, The Good Body, and Emotional Creature. Her books include Insecure at Last: A Political Memoir, New York Times bestseller I Am An Emotional Creature and her critically acclaimed memoir In the Body of the World. Eve adapted In the Body of the World into a play, directed by Diane Paulus, that she debuted at the American Repertory Theater. Earlier this year In the Body of the World had its New York debut at Manhattan Theatre Club earning Drama Desk and Drama League Award nominations, as well as three Outer Critics Circle Award nominations. Her play, Fruit Trilogy was performed at the Women of the World Festival in London and The West Yorkshire Playhouse. Her film credits include an HBO film version of her performance of The Vagina Monologues (2002). She also produced the film What I Want My Words to Do to You, a documentary about the writing group she led at the Bedford Hills Correctional Facility for Women, which premiered and won the Freedom of Expression Award at the Sundance Film Festival and premiered nationally on PBS’s “P.O.V.” in December 2003. Ms. Ensler is the founder of V-Day, the 20-year-old global activist movement to end violence against women and girls, which has raised over 100 million dollars for grassroots groups. V-Day led Ms. Ensler to also found One Billion Rising, the biggest global mass action campaign to end violence against women in human history in over 200 countries. She writes for The Guardian, Time Magazine, the International Herald Tribune and many other outlets. She was named one of Newsweek’s “150 Women Who Changed the World” and The Guardian’s “100 Most Influential Women.” Eve Ensler is the recipient of the 2018 Lucille Lortel Lifetime Achievement Award.

ANDREA LAUER (Costume Design) is a costume designer residing in NYC who works in Regional Theatre, NYC and Internationally. Selected design works include Broadway’s American Idiot, and Bring It On, The Musical. Other Recent Off Broadway work can be seen in The Boy Danced on Air (Abingdon Theatre Company) and School for Scandal (Red Bull), Murder for Two (2nd Stage), Title and Deed (Signature Theatre), and Midsummer Night’s Dream (Classic Stage). Regional theatres include The Old Globe, The Alliance, The Alley Theatre, Asolo Rep amongst others. Working internationally her most recent work was at The London Philharmonic and Shakespeare’s Globe and was also the production designer for the Beatles Sergeants Pepper’s 50th Birthday Extravaganza for the city of Liverpool in June 2017. She also works as a fashion stylist and an MIT Media lab Director fellow for 2017 as an artist, designer and inventor.

TONY MONTENIERI (Producer) Mr. Montenieri has worked with Eve Ensler and V-Day, the global grassroots movement to end violence against women and girls for 15 years. He has served in various roles for both Ms. Ensler and V-Day and currently is the Director of her production company, Lotus Productions while also serving as V-Day’s Acting Campaigns Director. In his tenure with Ms. Ensler he has worked both on and off-Broadway, including Emotional Creature, The Secret Life of Girls Around the World (Associate Producer) at the Signature Theater and most recently, In the Body of the World (Producer for Eve Ensler) at Manhattan Theatre Club. He is slated to receive an M.A. in Arts Administration from Goucher College in June.