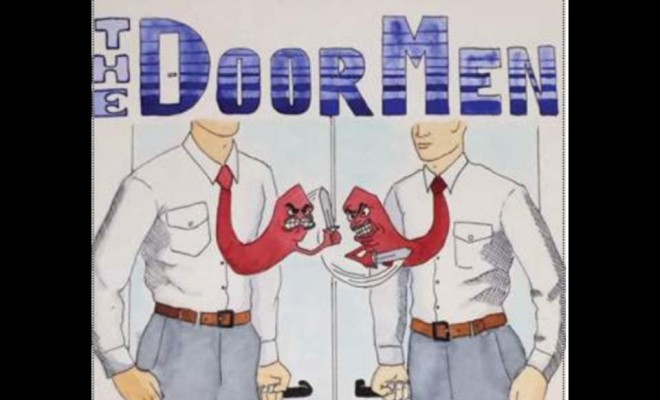 “A TALE OF TWO DOORMEN”

“Two Manhattan Doormen; Brave, Courteous, Respectful, Competitive, Filled with Musical Machismo…Watch as they battle in the streets and in the lobby vying for the coveted title of ‘Doorman of the Year.’”This is just part of the description offered by the press materials for the new musical, The Doormen, appearing now through August 4th at the C.O.W. Theatre as part of the New York International Fringe Festival.

The Doormen features book and lyrics by Victor Vergaeghe and Music by Joe Boover and Victor Verhaeghe. It was directed by Rachael Harrington, and features choreography by Liz Ramos. The plot is exactly as described: two doormen at neighboring luxury buildings compete for the coveted “Doorman of the Year”Award. Brock Tanner Kurosawa (played by Victor Verhaeghe) has been a doorman at The Abdomen (yes, that’s the name they gave the apartment building) for years, while young Danny Leviticus Pinkerton (played by Joe Boover) has just begun working as a doorman at The Whiffenpoof, and what he lacks in experience, he makes up for in enthusiasm.

Of course, because this is a musical, they can’t just fight – it has to involve singing (and occasionally dancing). The biggest way The Doormen surprised me was in its frequent use of topical humor, and entertainment industry “insider”jokes . Much of the choreography featured little touches of iconic styles, from poses made famous by A Chorus Line to 90s club dancing. They also managed to poke fun at musical theatre conceits such as the “dream ballet,”which in their show became Danny’s “Dance of Confliction.”

The music was very clever and sounded original while nodding to popular styles of music that we all know and love, most enjoyably in an R&B love ballad about doors (yes you read that correctly) featuring a rap break (performed impressively by Joe Boover.) However, the score did better in its more intimate moments, most notably a song Brock and Danny sing together near the end of the show, called “What’s a Doorman?,”(featuring Boover on guitar.) In this instance, the excellent writing of the music shone through.

The two main performers, Victor Verhaeghe and Joe Boover, were both excellent and provided the distinct contrast the story requires to be successful. Joe’s youthful enthusiasm perfectly suited his role as the young up-and-comer, and Victor was perfectly cast as the wiser (albeit no more mature) veteran doorman who is prone to get carried away by his competitive spirit. Also giving an enjoyable performance is Castor Pepper, as Bryce Dallas Howard, the owner of both apartment buildings. Having the landlord played in drag was a wonderful idea that contributed to the feeling of whimsy that is the lifeblood of The Doormen. And Pepper was just what this part needed to keep the audience laughing. (However, I would suggest making the landlord a more recognizable female celebrity, as I kept wondering if everyone knew who Bryce Dallas Howard was, and if they were missing the joke.)

Overall, The Doormen was a hilarious afternoon at the theatre. I thoroughly enjoyed myself, and would love to see subsequent incarnations of the show. I would love to see what Verhaeghe and Boover could do with some refining of the book and music, and a bigger production budget to work with. But while you can, go see The Doormen and, for an hour, enjoy pretending you can actually afford the rent in a luxury building!