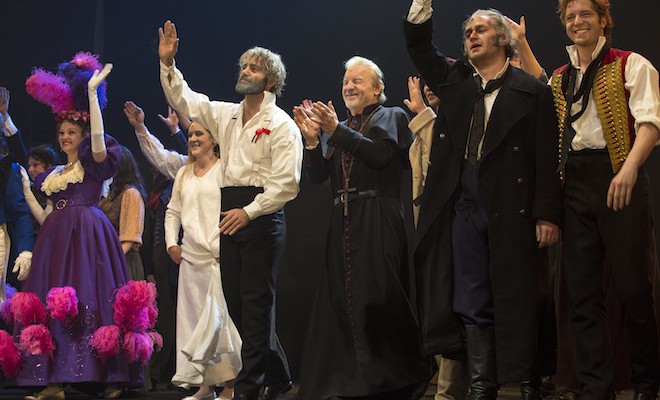 London and Broadway’s original Jean Valjean, Colm Wilkinson, performed the role of the Bishop for a special performance of LES MISÉRABLES Saturday evening, January 11 in Toronto at the Princess of Wales Theatre alongside Broadway’s next Valjean, Ramin Karimloo, who will star in Cameron Mackintosh’s new production of the legendary musical beginning March 1 at the Imperial Theatre.  Wilkinson passed the torch – and the silver candlesticks – to Karimloo in a special benefit performance for five different Toronto charities: Casey House, Covenant House, Ernestine’s, The Franciscan Missionary Sisters for Africa and Theatre 20. Wilkinson and Karimloo brought down the house with a special curtain call duet of “Bring Him Home.”  The Iranian-born Karimloo, who grew up in Toronto, has idolized Wilkinson since he was 12 and saw him perform in the title role in The Phantom of the Opera in Toronto.  Karimloo went on to star as the Phantom in London, and since this November, as Jean Valjean, in Cameron Mackintosh’s new production of LES MISÉRABLES in Toronto, for which he has received unanimous acclaim.

Rehearsals begin Monday, January 13 in New York for Cameron Mackintosh’s acclaimed new production of Alain Boublil & Claude-Michel Schönberg’s Tony Award-winning musical masterpiece LES MISÉRABLES, which returns to Broadway beginning Saturday, March 1 at the Imperial Theatre.  The official opening night for LES MISÉRABLES is Sunday, March 23.   The cast of the new LES MIZ features Ramin Karimloo (West End and current acclaimed Toronto star of Les Misérables, and The Phantom of the Opera and Love Never Dies in London) as Jean Valjean; Will Swenson (Tony Award-nominated  star of Broadway’s Hair and Priscilla Queen of the Desert) as Javert; Caissie Levy (West End and Broadway star of Ghost and Hair and Elphaba in Broadway’s Wicked) as Fantine;  Nikki M. James (Tony Award winner for The Book of Mormon) as Eponine; Andy Mientus (who captured the hearts of TV viewers with his portrayal of Kyle Bishop on the NBC series “Smash”) as Marius;  talented newcomer Charlotte Maltby as Cosette; acclaimed Canadian actor Cliff Saunders (The 39 Steps) as Thenardier;  Tony Award-nominee Keala Settle (Hands on a Hardbody) as Madame Thenardier and Kyle Scatliffe, (the West End production of The Scottsboro Boys) as the revolutionary Enjolras.

This newly re-imagined LES MISÉRABLES, which grossed over $160 million in its recent two and a half year American tour, is currently breaking box office records, receiving rave reviews and capacity crowds with the Canadian production at the Princess of Wales in Toronto starring Ramin Karimloo, who will play Jean Valjean on Broadway, through February 2.   International productions of the new LES MISÉRABLES have met with equal success and acclaim in the U.K., France, Spain, Japan and Korea and will open soon in Australia.  This new version of LES MISÉRABLES, which premiered in the U.K. in 2009, inspired filmmakers to make the immensely successful Oscar/Golden Globe/BAFTA-winning movie.

Chris Jones in The Chicago Tribune called the new LES MISÉRABLES, “uncommonly raw, unusually emotional and strikingly intense.  LES MIZ stands alone in its dramatic and emotional achievements.  The storytelling is formidable; the theatricalization spectacular.  This new production refreshes and rethinks without sacrificing any singularity of intensity or artistic occasion.  It is not to be missed.”  Anita Gates in The New York Times called this new production of LES MISÉRABLES “a splendidly reworked, unquestionably spectacular production from start to finish.”  Benedict Nightingale in The London Times hailed the new LES MIZ “a five star hit, astonishingly powerful and as good as the original.”  Peter Filichia in The Star-Ledger called it “a dynamically re-imagined hit.  This LES MISÉRABLES has improved with age” and Roma Torre on NY1 News proclaimed “this new production actually exceeds the original.  The storytelling is clearer, the perspective grittier and the motivations more honest.  Musical theatre fans can rejoice: LES MIZ is born again.” Terry Byrne in The Boston Globe said, “The new production of LES MISÉRABLES qualifies as a truly extraordinary theatrical experience.  It is nothing less than stunning.  This production is so breathtaking, you simply won’t want it to end.”  And Richard Ouzounian in The Toronto Star wrote, “This new production of LES MISÉRABLES is superbly revised.  Inspired by the paintings of Victor Hugo himself, this new staging moves with both tremendous agility and equal force. Time and time again, I found myself gasping in admiration for the images that filled the stage, not just for their own beauty, but for the power they brought to the story.  Thrilling and brilliant.”

Based on Victor Hugo’s classic novel, LES MISÉRABLES is an epic and uplifting story about the survival of the human spirit.  The magnificent score includes the classic songs “I Dreamed a Dream,” “On My Own,” “Stars,” “Bring Him Home,” “Do You Hear the People Sing?,” “One Day More,” “Empty Chairs at Empty Tables,” “Master Of The House” and many more.

Cameron Mackintosh’s production of LES MISÉRABLES is written by Alain Boublil and Claude-Michel Schönberg and is based on the novel by Victor Hugo. It has music by Claude-Michel Schönberg, lyrics by Herbert Kretzmer and original French text by Alain Boublil and Jean-Marc Natel, original adaption by Trevor Nunn and John Caird and additional material by James Fenton. The original LES MISÉRABLES orchestrations are by John Cameron with new orchestrations by Christopher Jahnke and additional orchestrations by Stephen Metcalfe and Stephen Brooker.

The new production is directed by Laurence Connor and James Powell, designed by Matt Kinley inspired by the paintings of Victor Hugo with costumes by Andreane Neofitou and Christine Rowland, lighting by Paule Constable, sound by Mick Potter and projections by Fifty-Nine Productions.

The original production of LES MISÉRABLES can now only be seen in London where it’s currently in its 29th record-breaking year. LES MISÉRABLES originally premiered at the Barbican Theatre in a co-production with the Royal Shakespeare Company in October 1985.   It transferred to the Palace Theatre in December of that year and then moved to its current home at the Queen’s Theatre in April 2004 where it is still playing to standing room only.  In October 2006 LES MISÉRABLES took over the title of World’s Longest Running Musical followed by two other Cameron Mackintosh productions, Andrew Lloyd Webber’s The Phantom of the Opera and Cats.

The original New York production of LES MISÉRABLES premiered first at the Broadway Theatre on March 12, 1987, later moving to the Imperial on October 17, 1990, where it played until May 18, 2003, for a total Broadway run of 6680 performances.

There have been four U.S. national touring companies of LES MISÉRABLES that have played more than 200 cities.  Broadway audiences welcomed LES MISÉRABLES back to New York on November 9, 2006 where the show played the Broadhurst Theatre until its final performance on January 6, 2008.  LES MISÉRABLES is the 4th longest-running Broadway production of all time.

Seen by nearly 65 million people worldwide in 42 countries and in 22 languages, LES MISÉRABLES is undisputedly one of the world’s most popular musicals ever written, with new productions continually opening around the globe, with seven more currently scheduled.  The worldwide gross for LES MISÉRABLES is $2.5 billion. There have been 47 cast recordings of LES MISÉRABLES, including the multi-platinum London cast recording, the Grammy Award-winning Broadway cast and complete symphonic albums and live recording of the New 25th Anniversary Production and the motion picture

soundtrack which sold close to 2 million copies and topped the Billboard and iTunes charts.  The DVD’s of the 10th Anniversary at the Royal Albert Hall and the 25th Anniversary at The O2 have sold millions of copies worldwide.

There are over 2,500 productions of the LES MISÉRABLES School’s Edition scheduled or being performed by over 125,000 school children in the UK, US and Australia, making it the most successful musical ever produced in schools.

In celebration of its 25th anniversary, the legendary musical LES MISÉRABLES made theatrical history with an international first: three different productions in London at the same time. The Original Production at the Queen’s Theatre, the acclaimed New 25th Anniversary Production at the Barbican (where the show originally premiered) and a celebratory concert at The O2 Arena.  The O2 Concert was presented in over 500 cinemas throughout the United States on November 17, 2010 and is now available on Blu-ray DVD through Universal Studios Home Entertainment.

The 2012 Universal film version of LES MISÉRABLES co-produced by Cameron Mackintosh and Working Title Films, and directed by Tom Hooper, is one of the most successful musical films ever.  The film received the Golden Globe Award as Best Picture (Musical/Comedy) and received eight Academy Award nominations, including Best Picture, and won three Academy Awards.  The film’s soundtrack debuted at #1 on Billboard’s Album chart and has sold over 2 million copies worldwide.

The sumptuous definitive new book, Les Misérables – From Stage to Screen from Applause Books tells the story so far of the World’s Longest Running Musical in words, pictures and rare facsimile memorabilia and is written by Benedict Nightingale and Martyn Palmer, with a foreword by Cameron Mackintosh.

← Previous Story What Spring 2014 Show Are You Interested In Seeing?
Next Story → ROCK OF AGES TO PERFORM AT SUPERBOWL TAILGATE PARTY