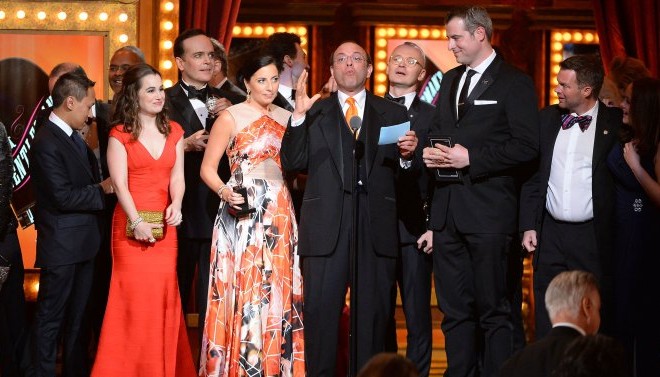 ON WEDNESDAY, JUNE 18 FANS ARE INVITED TO POSE WITH THE 2014 TONY®  AWARD FOR BEST MUSICAL

IN FRONT OF THE THEATRE

New York, NY – On the heels of its Tony® Award win for Best Musical, A Gentleman’s Guide to Love and Murder will bring its award home to the Walter Kerr Theatre on Wednesday, June 18, to allow fans to pose with the prized medallion immediately following that day’s matinee performance.  In a special, unprecedented ceremony beginning at 4:45 p.m., fans will be invited to hold the 2014 Tony®  Award for Best Musical and pose for photos in front of the theater (219 West 48th Street).  This event is open to the public, and will end at 6:00 p.m.

A Gentleman’s Guide to Love and Murder officially opened at the Walter Kerr Theatre (219 W. 48th Street) to overwhelmingly rapturous reviews on Sunday, November 17, following critically acclaimed, smash-hit runs at The Hartford Stage and San Diego’s Old Globe Theatre.  It has gone on to garner the most award nominations of the season, winning the Tony, the Drama Desk, the Drama League, and the Outer Critics Circle awards for Best Musical.

Monty Navarro (Pinkham) has just received some really great news from his late mother’s lifelong friend Miss Shingle (Carr). He’s a long-lost member of a noble family and could become the next Earl of Highhurst! There are only eight minor issues, namely the other relatives who precede him in line for the title. So Monty does what any ambitious, highborn gentleman would do: he sets out to eliminate them one by one, all while juggling his mistress (O’Hare) (she’s after more than just love), his fiancée (Worsham) (she’s his cousin, but who’s keeping track?), plus the constant threat of landing behind bars! But it will all be worth it if he can slay his way into Highhurst Castle…and be done in time for tea. Each of the eight heirs perilously standing in the way of Monty’s fortune are played by Jefferson Mays in a performance the New York Times calls “brilliant” and says “deserves to be immortalized in Broadway lore.”

The performance schedule for A Gentleman’s Guide to Love and Murder is as follows: Tuesday and Thursday at 7:00 PM, Wednesday, Friday and Saturday at 8:00 PM, Sunday at 3:00 PM, with 2:00 PM matinees on Wednesday and Saturday.