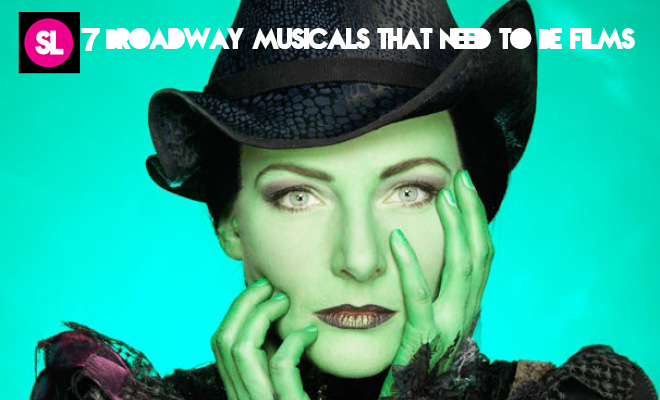 7 BROADWAY MUSICALS THAT NEED TO BE FILMS

Have you ever dreamed about what musicals should be turned into movies? Have you ever fantasized about which stars should play your favorite roles in the film version? Stagelight Magazine’s Phillip Fazio dishes on exactly which big Broadway musicals are long overdue for a transfer to the big screen, and which big names should be involved.

With the Jersey Boys film coming out this summer, The Last Five Years and Lucky Stiff about to debut at the Toronto International Film Festival, yet another movie version of Annie premiering this Christmas, and the highly anticipated film version of Into The Woods finally arriving at the end of the year, we are in the midst of a Movie Musical Renaissance! As exciting as these new adaptations are, I’m a little surprised that a couple of them made the transfer to the silver screen before some of Broadway’s biggest hits. Case in point, could anyone have predicted a film version of Lucky Stiff would come out before the Wicked movie? Exactly.

So listen up, Harvey Weinstein! Here is my list of seven musicals that are ripe for the picking by the powers that be in Hollywood: Ok let’s start off this list by correcting a major problem from the past. The film version of A Chorus Line is a monumental disaster by any standard. It is impossible to watch any part of this movie and not be boggled by every decision that was made. From the travesty that is the ‘new’ choreography, to the cheesy Zach and Cassie flashbacks, to the horrific editing, this adaptation just screams FLOP!

So let’s do it right this time. Don’t even think of star casting this one with Hollywood names (none of them will be able to handle the dancing). Just get a smart director who knows the real struggle of being a “Broadway Gypsy” and please have Baayork Lee recreate Michael Bennett’s thrilling original choreography this time! Obviously it’s not going to shatter box office records, but it’s also going to be a relatively inexpensive movie to make. Rent out the Shubert Theatre for a few weeks when Matilda closes, get Natasha Katz to work her theatrical magic with the lighting, higher a cast of hard working triple threats who are currently in the trenches of Broadway, and voilà!

To get an idea of what it might look like, check out the original cast performing the opening number on the 1976 Tony Awards. Look at the way the camera is used to capture every pivotal moment of the drama while never making the viewer feel claustrophobic and still showcasing the choreography. This could be the film of A Chorus Line…

This is a musical that I think would actually make a stronger impression on film than it did in the theater. In a movie, they can literalize the two worlds of the text by creating two separate dimensions. We can see the children at home or at school in the dark, harsh realities of late 19th century Germany and then cut away to a contemporary performance space for the rock songs commenting on the action.

In the original Broadway production, I always found this duality to be muddled and unspecific. On film, and especially with a Director like Rob Marshall (king of movie musical songs taking place in an alternate reality), a Spring Awakening film would find its ideal format.

This one’s easy. As the brilliant Simon Chong showed, make it a South Park-style animated movie! Sondheim always says that “content dictates form” and the content of Book of Mormon is obviously right in the South Park form. South Park: Bigger, Longer, & Uncut already showed that this type of full length animated musical works, so why make this a live action movie when the answer is so obvious?

This one is extremely tricky. Nobody wants to see a literalized film version of Pippin, set in the realistic Middle Ages. Part of what makes it work so well on stage is the abstract nature of the Leading Player and his mysterious troupe. To work on film, the director needs to create a specific world with a striking visual backbone. Lars Von Trier has proved with movies like Dogville and Manderlay that he has the inherent ambition and avante garde style needed to create a thrilling new take on Pippin for film. Let’s also not forget that Lars Von Trier is no stranger to the movie musical world, having written and directed the ground-breaking Dancer in the Dark.

As far as casting, I would love to see what Eddie Redmayne would bring to the title role. I also think Paterson Joseph, currently featured on HBO’s The Leftovers as the puzzling and peculiar Wayne, would make a fascinating Leading Player. No stranger to the stage, Joseph was trained at the London Academy of Music and Dramatic Art and has a long list of credits with the Royal Shakespeare Company. After the great financial success of the movie version of Les Misérables, Cameron Mackintosh has stated that he also intends to bring Miss Saigon to the big screen. Well let’s get to it, Cameron! The original staging was visually cinematic and extremely popular; it’s shocking that more than 25 years later Miss Saigon has yet to make the stage-to-screen transfer. Even such high profile directors as Stephen Spielberg have expressed interest in the project. So what’s the hold up?

I actually think Spielberg would be a great choice for the material, being no stranger to epic war movies about love and loss. After Ken Watanabe is finished with the revival of The King and I on Broadway, can we enlist him for the pivotal role of The Engineer? Now that Aaron Tveit has been racking up several TV and film roles, it seems a no brainer to cast him as Chris. The role of Kim proved to be a star making role for Lea Salonga, and it looks like it’s doing the same for 18-year-old Eva Noblezada in the current West End revival. Just watch the trailer for the new production that is rumored to be heading to Broadway next season. Oh and speaking of Salonga, can we please get her as
Gigi?! We all know it’s only a matter of time before this behemoth Broadway hit makes the transition to film. I personally would love to see the movie musical be a more faithful adaptation of the Gregory Maguire novel. Remember Yackle and The Clock of the Time Dragon? However, I know the odds of that happening are about as likely as a house falling on me, so I’ll let it go.

As with The Book of Mormon, I think the best way to adapt the Broadway musical of Wicked to film would be to go the animation route. Storyboard artist Heidi Jo Gilbert made a sample of what an animated “Defying Gravity” might look like, and I think it’s brilliant. Not doing a live action film would also give Idina Menzel and Kristin Chenoweth the opportunity to repeat their roles, thus appeasing the die hard Wicked fans and preventing riots on the streets outside of the Gershwin Theatre. My one request is that Liza Minnelli voices the role of Madame Morrible… Speaking of die hard fans, there will certainly be some riots if Follies gets botched on the way to the big screen. I know this to be true because I will be the one leading the charge. This is another rumored and “in development” project that is long overdue. Here’s a fascinating article detailing an ‘almost-was’ film version from 1972 featuring a who’s who of former MGM legends:

In today’s world, I would happy to have Mike Nichols directing, with Bob Avian recreating and adapting the original Michael Bennett choreography. Who would be better than Annette Bening as the coldly sophisticated Phyllis Rogers Stone opposite Kevin Kline as the successful but lost Ben Stone? In the pivotal role of Sally Durant Plummer, Emma Thompson would be absolutely heart breaking. Rounding out the two main couples, let’s add Kevin Spacey as the loyal but neglected Buddy Plummer.

In the featured roles, I would kill to see Ann-Margret as Carlotta Campion, Barbara Harris as Hattie Walker, Carol Burnett as Stella Deems, Leslie Caron as Solange La Fitte, Teresa Stratas as Heidi Schiller, and Dick Van Dyke and Mary Tyler Moore as Theodore and Emily Whitman. Well, one can dream…