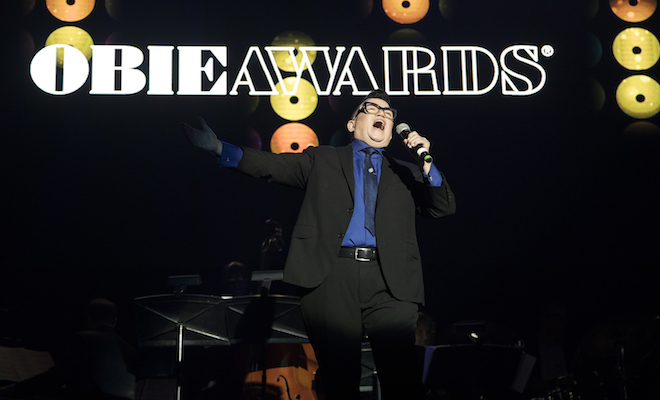 The evening’s festivities, which were live-streamed on the official Obie Awards Facebook page www.facebook.com/ObieAwards, also included an opening number featuring Obies host Lea DeLaria. In addition, special performances were given by Katrina Lenk who performed “Omar Sharif” from The Band’s Visit; Kecia Lewis, Austin Reed Alleman, Jessie Shelton, Storm Thomas, and William Youmans who performed “There’s Only What I Know” from The Skin of Our Teeth; The Fantasticks’ Daniel Bellomy who performed “Try to Remember” as part of the In Memoriam; and a rousing finale “Let the Sunshine In” honoring the 50th Anniversary of Hair performed by Lea DeLaria, Obie Award winner Daphne Rubin-Vega, and Lena Hall.

The Ross Wetzsteon Award ($3,000 prize)
Theatre for a New Audience

The Village Voice created the Obie Awards, at the suggestion of then editor Jerry Tallmer, soon after the publication’s own inception in 1955, to encourage the newly burgeoning Off Broadway theater movement and to acknowledge its achievements. The Obies are structured with informal categories, to recognize artists and productions worthy of distinction in each theatrical year. Over the decades, the Obie Awards have played a major role in the Voice’s long history of championing work of innovative and exceptional quality Off and Off-Off Broadway. The Village Voice put the new downtown theater movement on the map with its in-depth coverage, becoming a forum for conflicting viewpoints which helped generate excitement over new works and new approaches to theater-making. The Obies have become a theatrical tradition, a meaningful way to acknowledge the best artistic achievements of downtown theater. The list of actors, writers, directors, and designers who have received Obies at pivotal moments in their careers is a virtual who’s who of contemporary theater. While the categories of the awards have continued to change almost annually, the creative spirit remains the same. The Obie Awards salute a theatrical movement that’s as important, and as vibrant, today as it was in 1955.

ABOUT THE AMERICAN THEATRE WING

One hundred years ago, on the eve of America’s entry into World War I, seven suffragettes—all women of the theatre—came together to form The Stage Women’s War Relief. A century later, the spirit and vision behind the founding of American Theatre Wing remains a touchstone for all we do. The Wing continues to champion bravery, with a focus on developing the next generation of brave artists. The Wing advances the future of American Theatre by celebrating excellence and nurturing the next generation: on stage, behind the scenes, and in the audience. We envision an American Theatre that is as vital, multi-faceted, and diverse as the American people.

The Wing’s programs span the nation to invest in the growth and evolution of American Theatre. We provide theatre education opportunities for underserved students through the Andrew Lloyd Webber Initiative, develop the next generation of theatre professionals through the SpringboardNYC and Theatre Intern Network programs, incubate innovative theatre across the country through the National Theatre Company Grants, foster the song of American Theatre through the Jonathan Larson® Grants, honor the best in New York theatrical design with the Henry Hewes Design Award, and illuminate the creative process through the Emmy-nominated “Working in the Theatre” documentary series. In addition to founding the Tony Awards® which are co-presented with The Broadway League, the American Theatre Wing co-presents the Obie Awards®, Off Broadway’s Highest Honor, with The Village Voice.

Visitors to AmericanTheatreWing.org can gain inspiration and insight into the artistic process through the Wing’s extensive media collection, and learn more about its programming for students, aspiring and working professionals, and audiences. Follow the Wing on Twitter and Instagram @TheWing, and on Facebook.com/TheAmericanTheatreWing.

ABOUT THE VILLAGE VOICE

Founded by Dan Wolf, Ed Fancher, and Norman Mailer, The Village Voice was created in 1955 as a platform for the downtown New York creative community. As the nation’s first alternative newsweekly, The Village Voice introduced free-form, high-spirited, and passionate journalism into the public discourse. The recipient of three Pulitzer Prizes, the National Press Foundation Award and the George Polk Award, The Village Voice remains a go-to source for coverage of New York’s politics and vast cultural landscape. Known for its unique mix of in-depth reporting and incisive arts, culture, music, dance, film, and theater reviews, The Village Voice provides readers with an indispensable perspective on the world’s most vibrant city. Winner of the National Press Foundation’s Online Journalism Award and the Editor & Publisher EPPY Award for Best Overall U.S. Weekly Newspaper Online, The Village Voice is staging a pivotal digital relaunch in 2017 alongside the relaunch of its newsweekly.