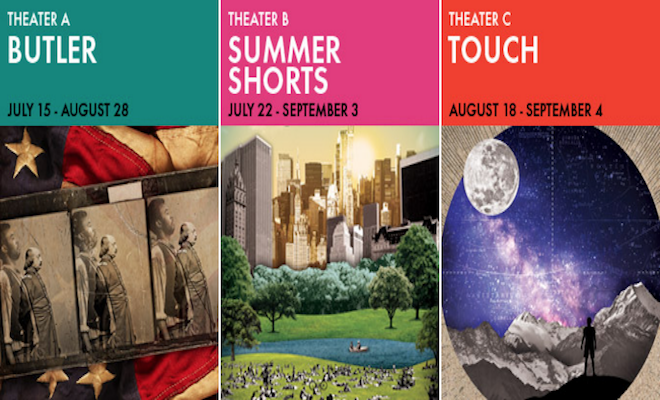 THE CLEARING by Helen Edmundson, directed by Pamela Moller Kareman

This gripping drama, which still resonates today, is set in 17th Century Ireland during protestant Oliver Cromwell’s attempts to solve the “Irish Question” through a ruthless campaign to rid Ireland of the Irish in preparation for British settlement. Robert, an English aristocrat, and his free-spirited Irish wife Maddy find their world turned upside down as the religious and political fallout of Cromwell’s regime intensifies. Should Robert ensure the economic prosperity of his family by betraying his Irish friends (and ultimately his wife) or should he stick by them and risk banishment to inhospitable Connaught? A tale of treachery, romance and passion.

ORWELL IN AMERICA by Joe Sutton, directed by Peter Hackett

With Jamie Horton and Jeanna DeWaal

In the first years after World War II, George Orwell, author of Animal Farm, is chaperoned on

an American book tour by a fetching young woman, provided by the publisher, whose job is

to dissuade Orwell from telling America why he is a proud socialist. This beautiful drama, first

presented as a World Premiere at Northern Stage, is a New York City Premiere production

Frederick Clegg appears to be an ordinary, slightly shabby clerk. After winning a fortune in the lottery, he buys a remote country house, and goes about furnishing it with everything he thinks a beautiful woman could desire. He then abducts a girl he has worshiped from afar, imprisoning her in the cellar amid his butterfly collection with tragic, electrifying results. John Fowles’s classic story of possession, obsession and love is considered one of the great works in modern literature.

Russ has a temper. Brian is a cheat. As their weekly tennis sets play out aggressively on stage, girlfriends Kate and Leslie render their amity and rivalry with sharp observation and wit. An explosive comedy about love, relationships, and the consequences of a lousy backhand.

THE CITY THAT CRIED WOLF by Brooks Reeves, directed by Leta Tremblay

Produced by State of Play

Three little pigs in satin, bears in teddies, rub a dub dub three men in a tub: this is not your

standard fairytale. Rhymetown is going to the wolves. A 59E59 audience favorite returns for State of Play’s 10th Anniversary season.

With Jake Broder and Michael Lanahan

rock — returns to 59E59 Theaters. HIS ROYAL HIPNESS LORD BUCKLEY is based on the hip routines of Lord Buckley, a comedian from the 40’s who rose to prominence in the 50’s and influenced counter culture in this country. The artists who cite Buckley as a major influence are a who’s who of comedy, music – actors and writers from Jack Kerouac and Bob Dylan to Lenny Bruce, Richard Pryor, Robin Williams and Johnny Depp. Lord Buckley was a hip ‘aristocrat’ ennobling the audience rather than himself and translating the great stories and histories of the world in to a bebop infused language he called ‘the hipsemantic.’

LIFE IS FOR LIVING: Conversations with Coward created and performed by Simon Green with David Shrubsole

Simon Green and David Shrubsole kick off the festive season 59E59 Theaters with an imaginative new show celebrating Sir Nöel Coward’s remarkable impact on British and American culture. LIFE IS FOR LIVING fuses theatricality, music and conversations, real and imagined, with British musical writing legends. Original songs marry with old favorites from “The Master,” blending gems from British musical ‘great’ Ivor Novello, with the wit of Dillie Keane and Fascinating Aïda, Lennon and McCartney, and many more in an exhilarating and entertaining holiday performance. ###