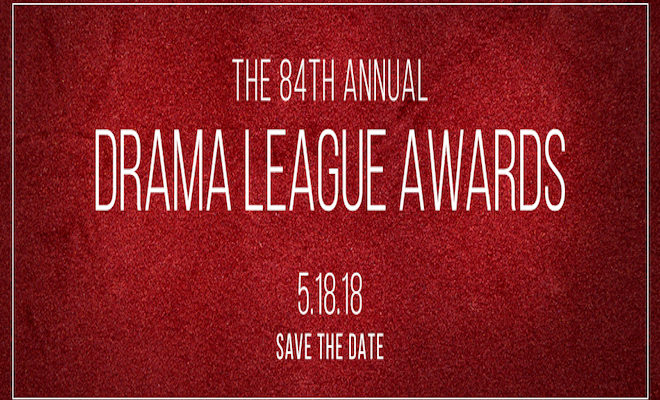 CASEY NICHOLAW
TO RECEIVE THE FOUNDERS AWARD FOR EXCELLENCE IN DIRECTING

THE 84TH ANNUAL DRAMA LEAGUE AWARDS
SET FOR FRIDAY, MAY 18, 2018
AT THE MARRIOTT MARQUIS TIMES SQUARE

NOMINATIONS FOR PLAYS, MUSICALS, REVIVALS AND PERFORMANCES
TO BE ANNOUNCED AT SARDI’S
WEDNESDAY MORNING, APRIL 18, 2018

The three 2018 honorees are: Tony® and Obie Award-winning actress, singer and songwriter Idina Menzel, receiving the Distinguished Achievement in Musical Theater Award; Tony® Award-winning director and choreographer Casey Nicholaw, receiving The Founders Award for Excellence in Directing; and the National Endowment for the Arts, receiving the Unique Contribution to the Theater Award. Jane Chu, Chairman of the National Endowment for the Arts, will accept this award on the NEA’s behalf.

The 84th Annual Drama League Awards Ceremony and Luncheon includes a VIP cocktail reception, seated luncheon, and awards presentation, and will be held at the Marriott Marquis Times Square in the Broadway Ballroom (1535 Broadway) on Friday, May 18, 2018 beginning at 11:30 a.m. The event is sponsored by MAC Cosmetics, Official Make-up Partner of The Drama League. The Drama League Awards Event Chair is Bonnie Comley.

Idina Menzel (Distinguished Achievement in Musical Theater Award). The career of Tony Award-winning icon Idina Menzel traverses stage, film, television and music. Menzel voiced Elsa in Disney’s Academy Award winning film “Frozen,” from which the song “Let It Go,” sung by Menzel, became an international phenomenon. During the Academy Awards in 2014 Menzel performed “Let It Go,” which won for Best Original Song. The track reached #5 on the Billboard Hot 100, making Menzel the first artist with both a Billboard Top 10 hit and a Tony Award for acting. Idina also reprised her role as Elsa in the animated short sequels “Frozen Fever” and “Olaf’s Frozen Adventure.”

A skillful songwriter, Menzel’s prolific recording career includes multiple cast albums and the solo albums Still I Can’t Be Still, Here, I Stand, and idina. In 2014 Menzel released the Christmas album Holiday Wishes, which debuted at #1 on Billboard’s Holiday Albums chart and gave Menzel a Top 10 album on the Billboard Top 200 Album Chart. Menzel received the Breakthrough Artist of the Year Award at Billboard’s annual Women in Music event in 2014 and recently completed a worldwide tour that included Asia, the UK and North America. Also, Menzel sang the National Anthem at Super Bowl XLIX.

Her additional film credits include Enchanted, Rent and Ask the Dust. On television, Menzel starred in Lifetime’s remake of “Beaches,” in which she portrayed the role of CC, made famous by Bette Midler in the feature film, and she appeared in the recurring role of Rachel’s biological mother on the series “Glee.”

Menzel reached superstardom on Broadway with her Tony Award-winning performance as Elphaba in the blockbuster Wicked, and in her Tony Award-nominated role as Maureen in the Pulitzer Prize winning Rent. Menzel earned her third Tony nomination in the original production of If/Then, after which she participated in the musical’s nationwide tour. Additionally, Menzel starred as Amneris in the Broadway production of Aida. She received the Theatregoers Choice Award for Best Actress in a Musical when she reprised her role in Wicked when the show premiered in London’s West End. Her Off-Broadway credits include the musical See What I Wanna See at The Public Theater, the pre-Broadway production of Rent, The Vagina Monologues and the role of Sheila in the Encores! production of Hair.

In 2012, Menzel released the CD and DVD “Idina Menzel Live: Barefoot at the Symphony,” a live concert at The Royal Conservatory’s Koerner Hall in Toronto, Canada, with an orchestra led by legendary composer/conductor Marvin Hamlisch, which aired nationally on PBS stations. Her international concert tour has included sold-out performances at Carnegie Hall and Radio City Music Hall, and a New Year’s Eve 2012 performance at the Walt Disney Concert Hall.

Philanthropy is important to Menzel, who, in 2010, co-founded A BroaderWay Foundation (www.abroaderway.com), an organization dedicated to offering girls from underserved communities an outlet for self-expression and creativity through arts-centered programs as a means of building self-esteem, developing leadership qualities and fostering personal and social achievements. Her work with the organization resulted in Menzel being named one of Variety’s Power of Women honorees.

National Endowment for the Arts (Unique Contribution to the Theater Award). Established by Congress in 1965, the National Endowment for the Arts (NEA) is the independent federal agency whose funding and support gives Americans the opportunity to participate in the arts, exercise their imaginations, and develop their creative capacities. Jane Chu is the 11th chairman of the NEA and has led the agency since 2014. Through partnerships with state arts agencies, local leaders, other federal agencies, and the philanthropic sector, the NEA supports arts learning, affirms and celebrates America’s rich and diverse cultural heritage, and extends its work to promote equal access to the arts in every community across America. Visit arts.gov to learn more about the NEA.

For five decades, the NEA has encouraged creativity through support of performances, exhibitions, festivals, artist residencies, and other arts projects throughout the country. Since 1966, the NEA has awarded $346 million through theater and musical theater programs, offering grants for the production or presentation of traditional or classical repertoire, new plays and musicals, development laboratories, showcases, artist residencies, work for young audiences, experimental work, community-based work, outdoor historical dramas, and puppetry.

The NEA’s Musical Theater Songwriting Challenge—a partnership with American Theatre Wing in collaboration with Playbill, Inc. and Disney Theatrical Productions—expanded to a national program in 2017-2018. This competition is available for high school students who have a passion for writing songs that could be part of a musical theater production.

In 2016, the NEA received a Tony Award for its “unwavering commitment in paving the road” between Broadway and cities throughout the U.S.

ABOUT THE DRAMA LEAGUE OF NEW YORK

The Drama League has been at the forefront of the American Theater community providing talent, audiences, and prosperous support since 1916. It is one of the nation’s oldest continuously-operating, not-for-profit arts advocacy and education organizations. Through its programs, initiatives and events, The Drama League serves over 3,000 artists and 15,000 audience members each season with over 150 events and programs. More information can be found at www.dramaleague.org.