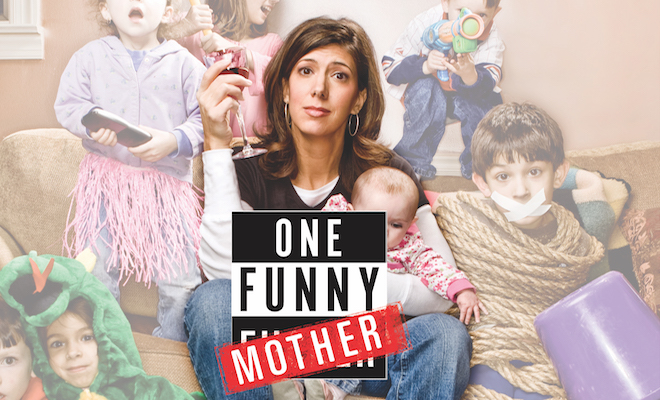 New York, NY (August 30, 2016) – The laughs continue! The producers of the hilarious Off-Broadway solo comedy, One Funny Mother, written, performed and starring comedian Dena Blizzard, announced today that a new block of tickets has just gone on sale for performances through the end of the year at New World Stages (340 West 50th Street, between 8th & 9th Avenues) where performances began March 30, 2016.

One Funny Mother stars comedian, former Miss New Jersey, and married mother of three, Dena Blizzard, in her hilarious solo comedy show about the trials and tribulations of motherhood and marriage. One Funny Mother has toured the United States and was recently named “Best One Woman Show” at the 2015 United Solo Festival in New York City. Dena’s response to the current “Pokemon Go” craze is “Chardonnay Go,” (http://tinyurl.com/hnog4al) her uproarious “Facebook Live” video that has received over 25 million views and gained worldwide attention. Producers are ID Producing Group, Fern Kershon and Diana Querubin.

One Funny Mother is dedicated to helping bring humor back to Motherhood and no one needs that more than parents of children with Special Needs and Learning Disabilities, like Dena’s daughter, Brooke, who has struggled with ADHD, learning disabilities and immobilizing anxiety. One Funny Mother is a great night out that focuses on laughing your way through parenthood, changing perspectives and encouraging parents to share their stories of failure so we all feel a little bit more normal. For additional information, please visit www.OneFunnyMother.com

One Funny Mother plays the following performance schedule: Thursdays at 7:00pm and Saturdays at 8:00pm.

Tickets for One Funny Mother are priced at $65 and may be purchased by calling Telecharge (212) 239-6200, or by visiting Telecharge.com. For additional information please visit the website at www.onefunnymother.com.

WHAT PEOPLE ARE SAYING ABOUT ONE FUNNY MOTHER….

“She is direct and extremely natural and amusingly quick.”
– Huffington Post

“PEE-IN-YOUR-PANTS FUNNY and stingingly (in a good way) honest.”
– Theatre’s Leiter Side

“IT’S IMPOSSIBLE TO SEE THIS PERFORMANCE AND NOT LEAVE LIGHTER AND HAPPIER!”
– The Reviews Hub

“I cannot think of the last time I laughed this hard and much and felt validated.”
– Motherhood Later

“DENA BLIZZARD HAS AUDIENCE ROLLING IN THEIR SEATS! She is warm, truthful, relatable, and an excellent laundry folder.”
– Stage Buddy

“You know that funny one that can really make you “ugly laugh” and make the wine come out your nose kinda funny: That’s Dena.”
– NY Theater Guide

“Dena is a world-class household goddess, a member of the continuum begun by Erma Bombeck and branded by Roseanne Barr. She’s observational but respectively sexier than Bombeck and less aggressive and angry than Barr. Being slender, pretty and smart is a help. Dena puts her “crazy” out there, for you to equate with your “normal.”
-Theaterpizzazz