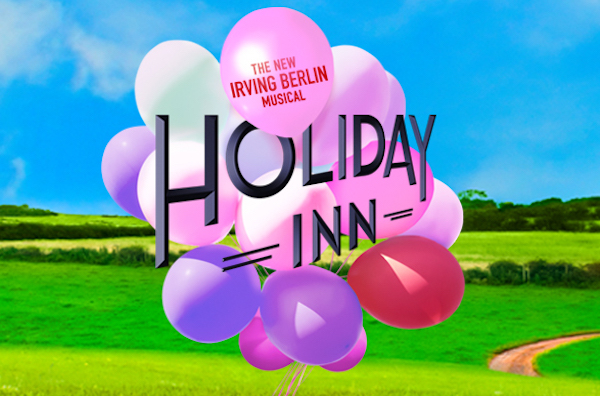 Directed by Gordon Greenberg and choreographed by Denis Jones, Holiday Inn, The New Irving Berlin Musical will begin preview performances on September 1, 2016, and open officially on October 6, 2016, on Broadway at Studio 54 (254 West 54th Street). This will be a limited engagement.

Holiday Inn, The New Irving Berlin Musical tells the story of Jim, who leaves the bright lights of show business behind to settle down on his farmhouse in Connecticut… but life just isn’t the same without a bit of song and dance. Jim’s luck takes a spectacular turn when he meets Linda, a spirited schoolteacher with talent to spare. Together they turn the farmhouse into a fabulous inn with sensational performances to celebrate each holiday, from Thanksgiving to the Fourth of July. But when Jim’s best friend Ted tries to lure Linda away to be his new dance partner in Hollywood, will Jim be able to salvage his latest chance at love? Whether you adored the film or are experiencing HOLIDAY INN for the first time, this year-round romance is sure to delight.

The new musical features over 20 classic songs from the Irving Berlin catalogue including “Steppin’ Out With My Baby,” “Shaking the Blues Away,” “Easter Parade,” “Cheek to Cheek” and “Heatwave.”

Major support for Holiday Inn is provided by The Blanche and Irving Laurie Foundation. Holiday Inn benefits from Roundabout’s Musical Theatre Fund with lead gifts from The Howard Gilman Foundation and Perry and Marty Granoff.

Holiday Inn was originally developed at The Goodspeed Opera House, one of the country’s most respected nonprofit institutions.

BIOS:
BRYCE PINKHAM (Jim). An American stage and screen actor, Bryce is most widely known for originating the role of Monty Navarro in the Tony Award-winning production of A Gentleman’s Guide to Love and Murder, for which he was nominated for a Tony, Grammy and Drama Desk Award. Most recently, he appeared in the Broadway revival of The Heidi Chronicles as Peter Patrone, for which he was nominated for an Outer Critics Circle Award and a Drama League Award for Distinguished Performance in 2015. His other Broadway credits include Carl Bruner in Ghost the Musical and Henry Clay in Bloody Bloody Andrew Jackson. Bryce’s television appearances include “The Good Wife” (CBS), “Person of Interest” (CBS), and the PBS miniseries “God in America.” His upcoming on-screen appearances include Baz Lurman’s Netflix series The Get Down, Robert DeNiro’s The Comedian and the second season of PBS’ Civil War Drama Series Mercy Street. A graduate of the Yale School of Drama, Bryce was awarded the Leonore Annenberg Foundation Early Career Fellowship in 2012. As a writer, Bryce has published articles on acting, performing, and education in American Theater Magazine, Yale Alumni Magazine and others. In 2012 Bryce helped found Zara Aina, an NGO that uses the power of theatrical storytelling to empower at-risk youth. In May 2013, Bryce led a team of American artists on Zara Aina’s pilot program to Madagascar. Bryce is also a frequent collaborator with Outside the Wire, a social impact theater company that serves many communities but particularly focuses on military audiences. His most notable international tours include Guantanamo Bay, Japan, Kuwait, and Qatar. Bryce holds a BA from Boston College and an MA from the Yale School of Drama.

CORBIN BLEU (Ted) is probably best known for the Emmy Award-winning “High School Musical” franchise. More recently, Bleu partnered with Karina Smirnoff on the 17th season of “Dancing With The Stars,” placing a close second. Bleu starred on Broadway as “Jesus” in the revival of Godspell, which followed his rave reviewed performance as “Usnavi” in In The Heights. Another stage highlight was Hairspray at the Hollywood Bowl, starring as “Seaweed” opposite Harvey Fierstein and Marissa Jaret Winokur. He was born in Brooklyn, NY and currently resides in Los Angeles with his soon-to-be wife, Sasha.

MALIK AKIL (Ensemble) is ecstatic and blessed to be making his Broadway debut with this company! A recent graduate of Baldwin Wallace University, he’d like to give thanks to God, amazing family and friends, TKO, and the Holiday Inn team!

WILL BURTON (Ensemble) is making his Roundabout debut with Holiday Inn! Broadway: An American In Paris (ensemble, u/s Henri/Adam) Théâtre du Châtelet: AAIP. Regional: Paper Mill, Goodspeed, Arena, The Muny. Thanks to Sara, my family and my teachers for their support.

SHINA ANN MORRIS (Ensemble). Roundabout: Anything Goes (u/s Erma). Other Broadway: Cinderella, Annie (Star to Be), Nice Work If You Can Get It, West Side Story (Consuela). Tour: Chicago (Annie). NY: Encores! Most Happy Fella, Bells Are Ringing. BFA: U of Michigan. Thanks to God, Mom, Sasha, Dad, family, WB, MM, teachers, the Carnahan team, & my heart, Mark.

SAMANTHA STURM (Ensemble). Roundabout debut! Broadway (Original Cast): On The Town, Matilda the Musical, Nice Work If You Can Get It, The Addams Family Musical. Nat’l Tours: Evita, Cats. Various regional credits. Thanks to everyone involved for the opportunity! And yes, thanks mom for making me take ballet, even though I complained. A lot. Twitter/IG: @SamanthaSturm

KEVIN WORLEY (Ensemble) tap dances because of THIS movie! Broadway: On the Town, Something Rotten, Dames At Sea, Bullets Over Broadway, Cinderella , 42nd Street, White Christmas, A Chorus Line. He dedicates his performance to his incomparable wife, Denise, and little monster, Declan.

IRVING BERLIN (Music & Lyrics). Born Israel Beilin in a Russian Jewish shtetl in 1888, he died as Irving Berlin in his adopted hometown of New York City in 1989. Songwriter, performer, theatre owner, music publisher, and soldier, he wrote scores to more than a dozen Broadway musicals including Annie Get Your Gun, and dozens of Hollywood movie musicals. Holiday Inn follows White Christmas and the London production of Top Hat in creating stage musicals based on his famous films. His more than 1,200 songs include “White Christmas,” “Puttin’ on the Ritz,” “Easter Parade,” “Always,” “Blue Skies.” “Cheek to Cheek,” “There’s No Business Like Show Business,” “Alexander’s Ragtime Band,” and “God Bless America.” Irving Berlin’s love for and generosity to the USA is exemplified by his establishing the God Bless America Fund, into which he places all royalties from the song, which have been donated over the years to the Boy and Girl Scouts. His numerous awards and accolades include an Academy Award for White Christmas, a Congressional Gold Medal, a special Tony Award, and commemoration on a US postage stamp.

GORDON GREENBERG (Director/ Co-Book Writer) has directed plays and musicals at major theatres across America and the U.K. including Williamstown, Old Globe, Paper Mill, Signature, Goodspeed, Huntington, Dallas Theatre Center, Asolo, New York Stage & Film, and Chichester, written for television and stage, and runs the musical theatre program at The New Group. His acclaimed revival of Guys And Dolls opened on the West End at the Savoy Theatre in December 2015. He directed and adapted (with Stephen Schwartz and Lin-Manuel Miranda) the revised production of Working at the Old Globe and 59E59 in New York. Other work includes Johnny Baseball for Williamstown Theatre Festival, Scramble Band (writer), a Disney Channel original movie musical, Rags for Roundabout (workshop), Pirates! Or Gilbert and Sullivan Plunder’d (created with Nell Benjamin) for Paper Mill and Goodspeed, The Baker’s Wife (revised with Stephen Schwartz) for Goodspeed and Paper Mill, Disney’s Believe (created with Kirsten Childs) for Disney Creative, Disney Fantasy Christening (with Neil Patrick Harris & Jerry Seinfeld). Current projects include The Secret of My Success for Universal (Director/co-writer), Tangled for Disney (Director), The Single Girls Guide for the Fifth Avenue in Seattle (Writer), Port-Au-Prince (writing with Kirsten Childs for The New Group), and co-writing a new movie musical for Nickelodeon Television. Born in Texas and raised in New York, Greenberg performed in his first Broadway show at age 12. He attended Stanford University, R.A.D.A., and NYU Film School.

UNIVERSAL STAGE PRODUCTIONS (Associate Producer) is the live theatre division of the world-famous motion picture studio. Universal’s record-breaking musical phenomenon Wicked recently celebrated its twelfth smash-hit year on Broadway. With a national tour and multiple international productions, Wicked has been seen by more than 42 million people worldwide, making it one of the most successful theatrical ventures of all time. In 2008, Universal’s critically acclaimed musical adaptation of Billy Elliot opened on Broadway and went on to win ten Tony® Awards including Best Musical. Universal also produced the Tony®-nominated Broadway production of Bring It On: The Musical, the acclaimed revival of The Gershwins’ Porgy and Bess, and is actively involved in the development of new work with many of the nation’s leading non-profit theatres.

Roundabout’s 2016-2017 season will include Holiday Inn: The New Irving Berlin Musical by Gordon Greenberg and Chad Hodge, directed by Gordon Greenberg with music and lyrics by Irving Berlin; Diane Lane in The Cherry Orchard by Anton Chekhov with a new adaption by Stephen Karam, directed by Simon Godwin; Arthur Miller’s The Price directed by Terry Kinney; Love, Love, Love by Mike Bartlett, directed by Michael Mayer; If I Forget by Steven Levenson and Napoli, Brooklyn by Meghan Kennedy. The 2016-2017 Roundabout Underground season includes Kingdom Come, a new play by Jenny Rachel Weiner.