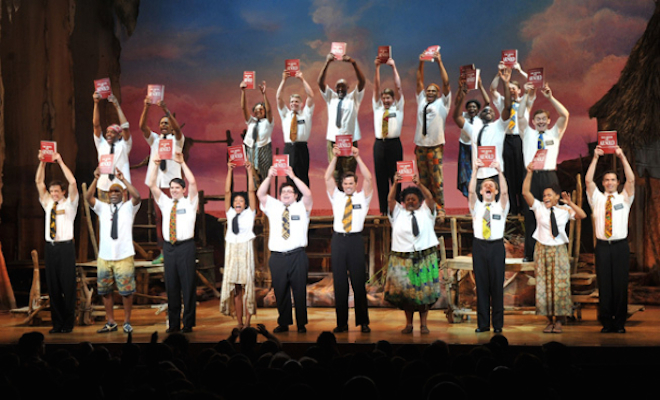 3 YEARS OF BOOK OF MORMON

New York- Can it be true? Has it already been three years since “The Book of Mormon” began its hilarious run on Broadway? Since its officially premiere date on March 24, 2011 at the Eugene O’Neill Theatre, “The Book of Mormon” has received wide critical praise for everything from words and music, to performance and most notably, laughter.

The hit show has not only captivated audiences here in New York, but has also spawned two U.S. National Tours, and last year made its debut on London’s celebrated West End. The devilishly funny story of two young Mormon missionaries sent from their homes in Provo, Utah to an extremely poor and terrorized mountain village in Northern Uganda, has translated into box office gold at every stop.

Written by the guys that created “South Park,” Trey Parker and Matt Stone, in collaboration with Robert Lopez of “Avenue Q” fame, “The Book of Mormon” has received nine Tony awards and four Laurence Olivier Awards among its many honors. That may seem like a lot of praise in three short years, but the story of “The Book of Mormon” began in the summer of 2003, when Trey and Matt met Robert Lopez after attending a performance of the Broadway hit “Avenue Q.” Like most worthwhile things in life, the road to success was paved with hard work and dedication.  After seven plus years of countless meetings, rewrites, and several “workshops,” the play was finally ready for the “Great White Way.”

With its outrageous humor, wonderful score, and unique choreography, “The Book of Mormon” was declared an “overnight success” and has continued to delight the sold out crowds that line up for each performance. Containing several religious themes, the musical (good-naturedly) lampoons the rigid dogma and curious beginnings of The Church of Latter-day Saints, while still praising its faith and well meaning intentions. Co-writer Trey Parker has said that the play is, “an atheist’s love letter to religion,” and over the past three years, theatergoers of all beliefs and walks of life have been thoroughly entertained and very thankful for that love letter.

← Previous Story Q & A WITH TONY WINNER ROBERT L. FREEDMAN
Next Story → IF/THEN A GREAT SHOW FOR FANS OF THEATRE, NOT SO MUCH FOR FANS OF FROZEN