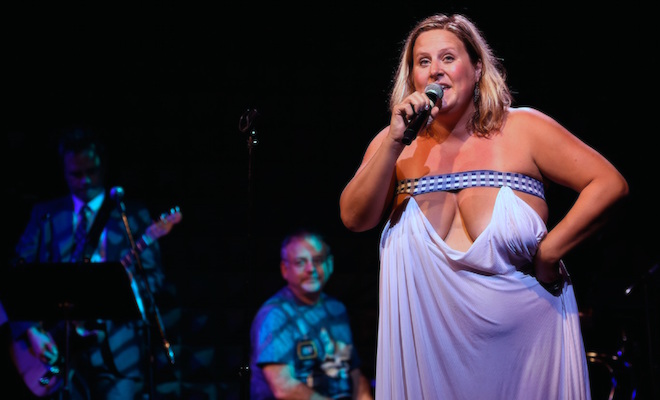 BRIDGET EVERETT’S “ROCK BOTTOM” IS BACK!

18 PERFORMANCES ONLY FOR RETURN ENGAGEMENT
November 5, 2014 – Due to popular demand and a recent sold-out run at Joe’s Pub, The Public Theater announced today it will bring back Bridget Everett’s ROCK BOTTOM for 18 additional performances, January 6-February 20, 2015. Created by Bridget Everett, with Marc Shaiman, Scott Wittman, Adam “Ad-Rock” Horovitz and Matt Ray, and directed by Scott Wittman, this shockingly funny and moving show was originally commissioned as part of the Joe’s Pub 2013 New York Voices series and became a downtown hit when it opened to critical acclaim in September and was extended until its limited engagement ended on October 16.
“How could we, a mere theater, resist the unstoppable force that is Bridget Everett?” said Public Theater Artistic Director Oskar Eustis. “Resistance was futile – and not really as fun as bringing her back.”
“It has been absolutely thrilling to watch how New York has embraced and exalted Rock Bottom and Bridget,” said Director of Joe’s Pub Shanta Thake. “We are delighted to be able to offer another dose of this phenomenal artist!”
ROCK BOTTOM is what happens when you are too passionate to give up, and too big to fail. The ferociously talented Bridget Everett wrote the show, a chardonnay-soaked journey through the highs and lows of her life, with the Tony Award-winning songwriting duo Marc Shaiman and Scott Wittman. Longtime collaborators and friends Adam “Ad-Rock” Horovitz and Matt Ray contributed music as well. In it, Everett shares intensely personal moments next to wildly hilarious ones, baring her heart and much more to her audiences. ROCK BOTTOM features new original songs written with Shaiman, Wittman, Ray and Horovitz, plus favorites from Everett’s monthly sold-out show with the Tender Moments.
“Who says the city no longer produces artists who challenge, provoke and even, on occasion, dare to disgust?… Everett can rock hard and does, using her mighty belt to whip the audience into a lather.”
—Charles Isherwood, New York Times
“It was all flavors of crazy, and I loved every second.”—David Cote, Time Out New York
Featuring Bridget Everett, the complete company of ROCK BOTTOM is to be announced. Everett’s lavish costumes are by Larry Krone for House of Larréon.
Tickets for this return engagement are available now by calling (212) 967-7555, www.publictheater.org, or in person at The Taub Box Office at The Public Theater at 425 Lafayette Street. Member tickets are priced at $30 and single tickets are $40. Joe’s Pub at The Public serves food nightly but there is no food or drink minimum for ROCK BOTTOM. The Library at The Public is open nightly for food and drinks, beginning at 5:30 p.m.

BRIDGET EVERETT has been called the Most Exciting Performer in New York City by the Village Voice, and one of the Funniest People in New York by Time Out. Her film, theater and television credits include “Inside Amy Schumer,” “Two Broke Girls,” Sex And The City, “Bridget and Neal are F*cking and Adam Is Watching,” At Least It’s Pink, and most recently a guest spot at Carnegie Hall performing with the legendary Patti LuPone. Everett has appeared at Montreal’s Just For Laughs Festival, HBO’s Aspen United States Comedy Arts Festival, The Adelaide International Cabaret Festival, The San Francisco Sketchfest, and Bonnaroo. Everett and her band, The Tender Moments, perform regularly to sold-out crowds and have welcomed special guests as varied as Fred Armisen, Patti LuPone, Flea, Dan Finnerty (The Dan Band), Tonya Pinkins, Marc Shaiman, Erin Markey, Peaches, Neal Medlyn and Jake Shears (Scissor Sisters). Their album, POUND IT, is available now on iTunes.

SCOTT WITTMAN along with Marc Shaiman, was recently honored by the NY Pops at Carnegie Hall. Together, they co-wrote the lyrics for the Olivier Award-winning musical Hairspray, for which the pair received Tony and Grammy Awards. He also served as an executive producer on the hit film starring John Travolta. They teamed up again on Broadway for Martin Short: Fame Becomes Me, which he also directed; and Catch Me If You Can, which received a Tony nomination for Best Musical. For their original songs on NBC’s musical drama “Smash,” Wittman and Shaiman were nominated for two Emmy Awards, a Grammy and a Golden Globe. On “Smash” they have composed songs for Jennifer Hudson, Uma Thurman, Bernadette Peters, and Liza Minnelli. Their original score for the Marilyn Monroe musical Bombshell was released on Sony Records. Wittman co-wrote the lyrics to Charlie and The Chocolate Factory directed by Sam Mendes, which recently playing to sold out houses at The Theatre Royal Drury Lane in London’s West End. For Patti LuPone, Scott has created and directed two Broadway shows, three recordings and three sold-out Carnegie Hall concerts. At LaMaMa, Wittman conceived and directed Jukebox Jackie starring Justin Vivian Bond, Cole Escola, Steel Burkhardt and Bridget Everett.

ADAM “AD-ROCK” HOROVITZ is best known as one third of the Rock-n-Roll Hall of Fame-inducted Beastie Boys. He is also the bass player for Bridget Everett and The Tender Moments.

MATT RAY a pianist and songwriter, performs in New York’s best venues nightly either fronting his own band, or accompanying some of the city’s most dynamic performers. Recent work includes leading a nine-piece band at Lincoln Center with Taylor Mac, performing at Carnegie Hall with Kat Edmonson, music directing The Billie Holiday Project at the Apollo Theater, string and piano arrangements for the fifth season finale of Showtime’s “Nurse Jackie,” Joey Arias’s shows at Joe’s Pub, performing in Paris with Mx. Justin Vivian Bond, and monthly gigs with Bridget Everett and the Tender Moments. He has also performed at the Edinburgh Fringe with Lady Rizo and toured with Taylor Mac’s A 20th Century History of Popular Music. Ray music directed and played piano in Mac’s Obie Award-winning play The Lily’s Revenge at HERE Arts Center. Ray has released two jazz albums: We Got It! (2001) and Lost In New York (2006); and an album of original pop/folk material called Songs For the Anonymous (2013).

ABOUT JOE’S PUB AT THE PUBLIC
Named for Public Theater founder Joe Papp, Joe’s Pub at The Public debuted in 1998 and plays a vital role in The Public’s mission of supporting young artists while providing established artists with an intimate space to perform and develop new work. In 2013, Joe’s Pub celebrated 15 years of the best in live music and performance nightly, continuing its commitment to diversity, production values, community and artistic freedom. It received a top-to-bottom renovation in 2011, leading to improved sightlines, expanded seating capacity and a new menu from acclaimed Chef Andrew Carmellini. With its intimate atmosphere and superior acoustics, Joe’s Pub presents talent from all over the world as part of The Public’s programming downtown at its Astor Place home, hosting approximately 800 shows and serving 100,000 audience members annually.

ABOUT THE PUBLIC THEATER AT ASTOR PLACE
Under the leadership of Artistic Director Oskar Eustis and Executive Director Patrick Willingham, The Public Theater is the only theater in New York that produces Shakespeare, the classics, musicals, contemporary and experimental pieces in equal measure. The Public continues the work of its visionary founder, Joe Papp, by acting as an advocate for the theater as an essential cultural force, and leading and framing dialogue on some of the most important issues of our day. Creating theater for one of the largest and most diverse audience bases in New York City for nearly 60 years, today the Company engages audiences in a variety of venues—including its landmark downtown home at Astor Place, which houses five theaters and Joe’s Pub; the Delacorte Theater in Central Park, home to its beloved, free Shakespeare in the Park; and the Mobile Unit, which tours Shakespearean productions for underserved audiences throughout New York City’s five boroughs. The Public’s wide range of programming includes free Shakespeare in the Park, the bedrock of the Company’s dedication to making theater accessible to all; Public Works, a new initiative that is designed to cultivate new connections and new models of engagement with artists, audiences and the community each year; new and experimental stagings at The Public at Astor Place, including Public Lab; and a range of artist and audience development initiatives including its Public Forum series, which brings together theater artists and professionals from a variety of disciplines for discussions that shed light on social issues explored in Public productions. The Public Theater is located on property owned by the City of New York and receives annual support from the New York City Department of Cultural Affairs; and in October 2012 the landmark building downtown at Astor Place was revitalized to physically manifest the Company’s core mission of sparking new dialogues and increasing accessibility for artists and audiences, by dramatically opening up the building to the street and community, and transforming the lobby into a public piazza for artists, students, and audiences. Key elements of the revitalization an expanded and refurbished lobby; the addition of a mezzanine level with a new restaurant lounge, The Library, designed by the Rockwell Group www.publictheater.org

The LuEsther T. Mertz Charitable Trust provides leadership support for The Public Theater’s year-round activities; Bank of America, Proud Season Sponsor of Shakespeare in the Park; The Harold & Mimi Steinberg New Play Development Fund at The Public Theater Supports the Creation and Development of New Plays; The Philip and Janice Levin Foundation – Lead Supporter of The Public’s Access and Engagement Programming; The Time Warner Foundation, Founding Sponsor of The Emerging Writers Group; Delta Air Lines, Official Airline of The Public Theater; New York Magazine is the official print sponsor of The Public Theater’s 2014-2015 downtown season; Public support is provided by the New York City Department of Cultural Affairs; the New York State Council on the Arts, a state agency; and the National Endowment for the Arts, an independent federal agency.