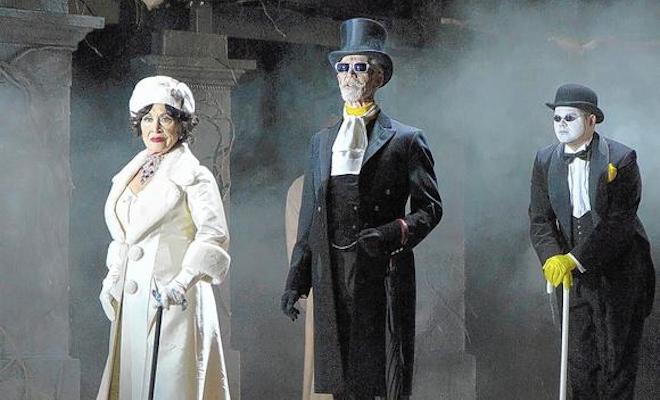 This summer, Williamstown Theatre Festival is staging a production of The Visit, a musical by John Kander and Fred Ebb, which has yet to receive a Broadway production. It has been previously staged at The Goodman Theatre in Chicago in 2001, at Signature Theatre in Arlington, VA in 2008, and as a concert presentation produced by the Actor’s Fund in 2011 at the Ambassador Theatre in NYC. This Williamstown staging has the creative team more hopeful than ever that a New York staging may happen in the near future.

The Visit is based on Friedrich Dürrenmatt’s 1956 play of the same name, and tells the story of a woman who returns to her hometown to exact revenge. This Williamstown version has been revised and is more streamlined, with a total running time of 95 minutes. The Visit features music by John Kander, lyrics by the late Fred Ebb, and a book by Terrence McNally.

The Williamstown staging stars Chita Rivera, and also features Jason Danieley, Judy Kuhn, Roger Rees, Diana DiMarzio, David Garrison, and Rick Holmes. Direction is by John Doyle (Sweeney Todd, Company), with choreography by Graciela Daniele (The Rink, Drood).
Williamstown states, “Rivera embodies Claire Zachanassian, the oft-widowed richest woman in the world, in The Visit. When Claire returns to the hardship-stricken town of her birth, the locals pray that her wealth will bring them a new lease on life, but the carefully plotted renewal she offers carries a dreadful price. Sardonic and morally complex, The Visit asks: What can your heart afford?”

Behind-the-scenes whispers have hinted that a New York transfer is just around the corner, especially following Williamstown’s successful track record of late. (Within the past 2 seasons, Far from Heaven and The Bridges of Madison County both premiered at Williamstown before arriving in New York.)

We can only hope The Visit will follow suit so that the New York theatre community will finally be able to see this long-awaited work (one of Kander and Ebb’s last) in a full production. The Williamstown production opened July 31 and runs through August 17, 2014.