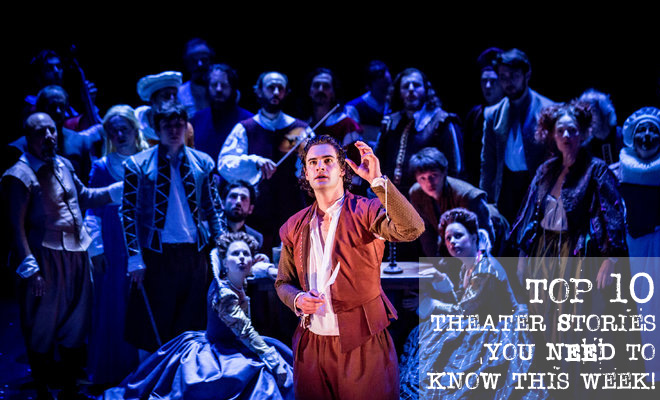 TOP 10 THEATRE STORIES FOR THIS WEEK

Breaking Bad’s Anna Gunn has ‘Sex With Strangers’ and the mean girls of Heathers are silenced for good… this week’s Top 10 is a must-read for any theater lover. Fast on the heels of last year’s hit one-man-show Patti Issues, Ben is back at the Duplex Cabaret Theater starting in September with his latest piece Bad With Money. We just hope Ben still has a few juicy Patti stories up his sleeve. 8. Andrea Martin flies back into Pippin for 24 performances only

After winning the 2013 Tony Award for her performance as Berthe in the current Broadway revival of Pippin, Andrea is singing, spinning, and flying her way back into our hearts for only 3 weeks of shows – which is ‘no time at all’! Second chances don’t always happen – this is yours. One of our favorite musicals of all time – Fiddler on the Roof – turned 50 this past week. Fiddler first opened on July 27, 1964 in Detroit. With countless revivals, tours, and regional productions, Fiddler’s success will certainly keep it a ‘tradition’ for fifty more years. 6. The Curious Incident of the Dog in the Night-Time on sale at the Barrymore Once again, don’t miss out on your free chance to see the casts of some of Broadway’s biggest musicals perform this Thursday in Bryant Park. The show starts at 12:30, but make sure to get there early. This week’s performances include A Gentleman’s Guide to Love and Murder, Once, and the soon-to-be-closed Heathers. While she won’t be starring in it, Mindy’s comedy Matt and Ben is a piece of true comic genius. Co-written with comedienne Brenda Withers, the show imagines that the script to Good Will Hunting falls from the sky and mysteriously lands in the laps of Damon and Affleck. Hilarity ensues beginning August 20 at the Producers Club. Finally, the ‘Tom Stoppard gods’ have gifted us a stage version of Shakespeare in Love. Featuring an enormous cast of 28 actors and musicians (plus one dog), the play opened to London audiences last week. Let’s hope the show has a New York address in its future. 2.James Franco to appear on stage, on film

Having closed this past week, the Broadway revival of Of Mice and Men starring Franco and Chris O’Dowd will be filmed before an invited audience this Tuesday night for National Theatre Live. Finally, Franco will get the screen time he so greatly deserves. ← Previous Story THE ONE SHOW YOU’VE GOTTA SEE, AND YOU’VE ONLY GOT 4 WEEKS TO DO IT…
Next Story → Next Post