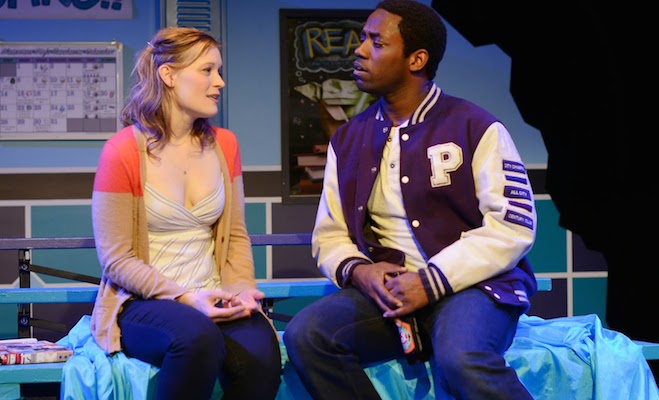 Why Flux Theatre Ensemble builds online worlds for its plays

You’ve only got a few more chances to see Flux Theatre Ensemble’s Jane the Plain—it runs through Saturday night at the 4th Street Theatre—but you can interact with the characters right now. They’ve all got their own Facebook profiles, and they’d love to talk to you.

Those Facebook pages are part of the show’s “worldbuilding,” a term coined by the sci-fi community for all the work that creates a fictional universe. It can encompass anything from a novel to an interactive game to web series. For Flux, of course, Jane the Plain‘s worldbuilding begins with August Schulenburg’s script, which follows the title heroine as she rescues a strange, glowing girl and is rewarded with great beauty. The results not only upend the social order of Jane’s high school—where her classmates include Lexi the Sexy and Scotty the Hotty—but also threaten the entire cosmos.

The worldbuilding could certainly end there, but by putting the characters on Facebook, Flux invites its audience to make a deeper connection. “You go into the theatre already knowing the world and knowing the characters,” says Alisha Spielmann, who plays Jane. Like all the other cast members, she operates her character’s Facebook page, which means she’s extending the story well beyond the production. “Hopefully, we’ve taken the world and expanded it, but without taking anything away from the experience of watching the play,” she says. “Hopefully, it enhances your experience before you see the show or even after you see it, if you follow us later.”

That concept—that the social media element shouldn’t diminish the show itself—is vital. None of the characters reveal any major plot points to their Facebook followers, and none of them stray too far from the way Schulenburg has written them. Instead, they talk about about television shows or the cool things they’re doing after school. “We’ve all very respectful of the playwright because we’re all in the company and know the playwright really well,” Spielmann says.

Besides, Schulenburg, who is also Flux’s artistic director, argues this online activity only bolsters his play. “It doesn’t feel like a loss of control so much as an expansion of what’s possible,” he says. “What’s been interesting is seeing the ways the actors will use the play to engage with people.”

Obviously, this is also a great marketing strategy for the company. What better way to get an audience invested in a show than to have them interact with it? This idea goes back at least to the late nineties and early aughts, when movies like A.I.: Artificial Intelligence and The Blair Witch Project went viral by wooing fans with dense online universes. And theatre companies like New Paradise Laboratories in Philadelphia have become known for fusing online engagement with the work they put on stage.

And for Flux, worldbuilding also speaks to their larger purpose as an ensemble. Schulenburg explains, “Flux’s mission, the short version, is to build a creative home, and so part of that is trying to think differently about how we engage with artists and engage with audience. We want to make the connection a little more substantive and sustained.”

The Facebook pages are only one piece of the puzzle. The worldbuilding for the 2012 sci-fi epic Deinde involved an elaborate series of posters and blog posts that were supposedly created in 2051, when the show was set. The online response was so strong that Schulenberg got invited to speak at a conference about some of the ideas in his script.

Meanwhile, Jane the Plain continues Flux’s ForePlay project, which develops new, short works inspired by the themes of the company’s current mainstage production. This time, anyone who wanted could submit a high school anecdote, and members of the core Flux community adapted several of those stories into monologues. A new monologue will be performed as a curtain-raiser before every remaining performance of the show.

In other words, regular audience members are now having their stories turned into plays that are part of the Jane the Plain universe. That’s a type of worldbuilding, too. And as Schulenberg sees it, these real-world experiences have to exist alongside the online projects. “Social media can’t replace actual community,” he says. “It can only enhance and strengthen actual community. It only works if it’s an online reflection of a real thing.”