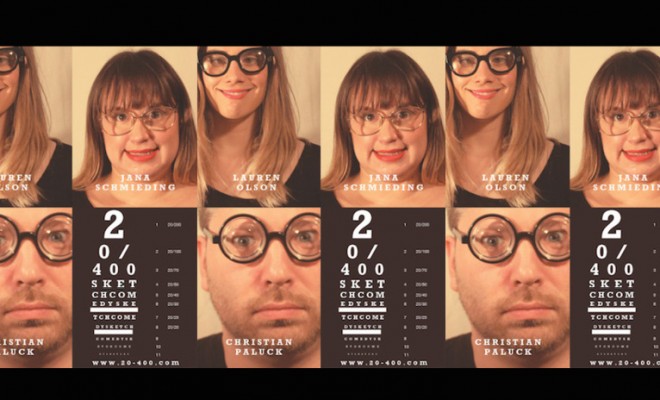 An eclectic mix of song, dance, and sketch comedy — each element more irreverent than the next. That’s the perfect way to describe 20/400: Sketchy as F*ck, the new sketch comedy show playing at the Celebration of Whimsy as part of the 2014 International Fringe Festival, through August 16th.

Sketch shows are typically a mixed bag — any avid watchers of Saturday Night Live can tell you that, what with the once spot-on NBC tuner now facing “hit-or-miss” reactions to its weekly outings. In that vein, some sketches in this show were better than others. However, the sketches that made me laugh really made me laugh — when they hit a home run, they hit a home run.

These comedians are definitely talented. Particularly enjoyable were the sketches where Christian Paluck played a Russian hostage forced to go on a date, and Jana Schmieding gave her best Spanish accent as she complained to her lover Ramón in the style of a telenovela. One of my other personal favorites was Lauren Olson as Carol Channing selling a new Gravy Train line of animal food. Olson appeared, too, in a memorable dance tribute to Drake’s “Started from the Bottom”, complete with twerking, bending, and a flashy purple jumpsuit.

Another notable sketch involved a dog food testing focus group. This sketch was reminiscent of an October 2011 SNL sketch highlighting Hidden Valley Ranch dressing (click here to see the sketch to which I am referring: https://screen.yahoo.com/taste-test-000000694.html ), and Schmieding commands attention with the same boldness as Melissa McCarthy (though in the Sketchy sketch, she plays the company manager and not the tester, as McCarthy does here). Another memorable sketch of hers came in the form of song, where she rattled off a random list of things she likes, including her extreme love of bacon — she deadpanned an especially funny quip about how the idea for the live Fringe show came about: “You know, this mac-and-cheese would really go great with bacon; we should do a show for the Fringe”. Paluck also commands the stage with his comedic chops, impeccably displayed in his own live — and lively — dance number and as narrator to a video sketch comparing nipple shapes to various Italian meats.

In short, though I had never heard of 20/400 or any of its players before seeing this show, I’ll definitely be looking out for their work in the future. A great evening in the theatre; these guys are hilarious — and, of course, sketchy — as f*ck.

← Previous Story WITH HUMOR AND HEART, “AND SHE BAKES , LIVE” PROVIDES RECIPE FOR SUCCESS
Next Story → “A TALE OF TWO DOORMEN”