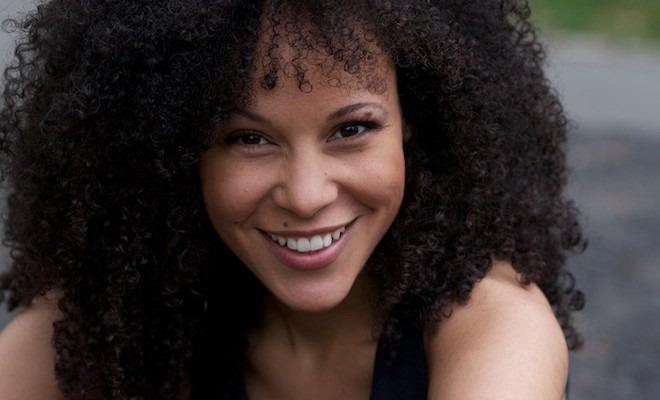 a few years ago i did a staged reading of  a work called ‘all the devils are here.’ there were snake babies, fortune tellers, and crying women. i was a blues guitar player and she was my singing girlfriend. i hadn’t seen her around before so i wasn’t aware of this svelte mass of talent so my mouth dropped when i heard her sing a song that i’d written for this play. if her voice was a food, it would be a red velvet cupcake with the most perfectly sweetened buttercream frosting. some years later (this past summer in fact) i got to see natalie perform sarah off broadway in ‘murder ballad’ with will swenson. swenson was good. natalie? damn. (i’m actually still in the theatre sitting in my seat wondering what happened to me.)

she took some time out of her schedule to answer a few questions for me:

the story: how long have you been involved in the industry? have you always known that you wanted to perform?

nat: i started singing and acting in church musicals and concerts when I was 4, but i got my first paid theater job when i was about 16. i remember that when the stage manager called to tell me i’d been cast, i said to him, “do you know what this means?! i’m a professional actress!” i don’t think he cared. and there were times i wasn’t interested in performing professionally, but i’ve been drawn to acting my whole life.

the story: what’s been the easiest part of your journey down this path?

nat: the easiest part? i think my job is always easiest when i have one steady gig, and it’s the right gig. i can concentrate on being excellent at that one role without worrying about when my next job or check will come along. that sense of security breeds creativity and the freedom to try new things in my off-time. often times, i have several jobs, and sometimes i have no jobs! that’s really fun. i try to be thankful for the work, and for the breaks. thankfulness makes everything easier.

the story: you currently have a reccurring role on the hit hbo show ‘boardwalk empire.’ how was that initial audition process?

(she suggested that i “edit the crap out of this,” but since i found her rambling endearing, i decided to forgo that suggestion.)

nat: the audition process was kind of magic. i was working in regional theater in san diego, and some broadway producers flew me out to new york. i was in town for 2 days, and had final callbacks for two broadway musicals on the same day. singing, dancing, and acting for hours, starting way too early in the morning… I was exhausted. my manager called. she had gotten me an audition for ‘boardwalk empire” on that same day. i was jet-lagged and so tired! i went in, said my 3 lines with 3 different accents (they hadn’t decided where Lenore was from), and got on a plane back to cali.

in Cali, i got 3 calls: one broadway show said, “no,” and the other quickly followed. but boardwalk wanted to see me again! i flew myself out to nyc, stayed with friends (jared grimes who now recurs on ‘boardwalk empire’ as a tap dancer and chondra profit who later booked one of those Broadway shows i flew out for), and went to steiner studios in brooklyn for the callback. i waited in a hallway with 3 actresses who looked so much like me it was a bit unnerving. they were all wearing mauve and pearls; i wore red. i went in, said my 3 lines, and went straight to a musical theater epa (equity principal audition) just so i would stop thinking about that martin scorsese tv show i had no chance of booking. (some people eat cookies and i go and audition…gotta keep it movin’.)

here’s the magic part: i got a call from my brother. my sister-in-law was going into labor about 4 hours away! through a series of coincidences you wouldn’t believe if i told you, i was able to meet my first nephew moments after he made his perfectly timed entrance into the world. i hopped a greyhound back to new york, and then a plane back to cali. i was so happy that ‘boardwalk’ had brought me to the east coast so that i could be a part of that special night. i didn’t care about the job one bit.

i landed back in cali (by this time jet-lag and i had become pretty good friends) and got the call from my manager telling me that i booked ‘boardwalk empire.’ when i found out i booked it, i imagined the producers sitting in a room, watching the audition tapes of 4 actresses who looked so much alike. we must have said our 3 lines the only way they made sense, and stared lovingly at our imaginary children off-camera the same way… i think the producers might have just said, “i dunno. let’s just hire the red one.”

the story: were there things about the role of ‘lenore’ that were a stretch for you? do you find that most of the roles you book are stretches for you?

nat: lenore isn’t a stretch. she’s conservative, educated, cultured, loves her kids, and is very proud of them, but she isn’t warm. i know lots of women like that. pursed lips, knees together, ankles crossed… but she’s got those kids, so she must have had fun at least 3 times in her life…if you know what i mean. she’s also a first lady of sorts. she’s married to a man who’s a leader and provider, but he’s also illiterate and a bit of a drinker. she’s used to nice things and considers appearances pretty important. in the beginning, i thought a lot about claire huxtable, my mom, my grandma, and laura bush.

for me, the challenge of most roles have to do mainly with technical stuff like how certain emotions or experiences would manifest themselves in a character, physically and vocally. i’m ridiculously empathetic, and relate to most people (and characters) pretty quickly. i have a lot of fun making potentially unsympathetic characters relateable and likeable to audiences. i had an interesting challenge with the musical ‘murder ballad’ this year. i got to play a woman for whom i had no sympathy. none. at all. it was quite fun getting to understand her and (hopefully) helping the audience do the same.

the story: many people watch the show and see the edited and final version, but you and i both know that so much more goes into it. for people not involved in that world, what are some elements that exist?

nat: sometimes you get rewrites that change your character’s entire point of view at 3 or 4 AM, and are called to set at 6AM. the amount of time it takes to have your hair and make up done is the amount of time you have to figure out the new scenes and commit them to memory. also things do take time. even if i get it right the first go ’round they have to do another take and it’s my responsibility to deliver the same quality of performance 2…3…8 times. i mean, more often than not i’m #onetakewachen

, but sometimes technical things happen all the time — camera, lighting, set, costume — and all those elements have to work together at the same time. it’s like being a part of a big magic trick.

the story: a lot of people think actors only act…or drink. what else do you do? in what other projects are you involved?

nat: hahaha. act and drink?? is that what they think of us?! i did get a giant bottle of ‘fireball’ at a stage door once…

(the story: for the record, she starts off the show (‘murder ballad’) drinking something, and that’s the only reason why i gave her the whiskey. to tie it all in. so there…)

my apartment is full of stage door wine… it’s all starting to make sense now.  🙂 i’m a storyteller at heart. i love to do that through acting, music, and original comedy. so in addition to “real life” stuff like girls’ nights, family time, hangin’ out in the park, seeing my friends’ shows, volunteering, and reading autobiographies of interesting people, i do a lot of readings for up and coming playwrights and composers. i also tour with a female swing/jazz vocal trio called ‘the manhattan dolls,’ perform my own stand up comedy, sing at various night clubs in the city, and right now am working on a really exciting project with my writing partner, caitlin! i hope to be able to tell you more about that soon.

the story: what’s been the best piece of advice that you’ve gotten?

nat: from a director- “be on time and easy to work with.” it all boils down to ‘the golden rule,’ really. be the kind of person you want to be around- in life and at work.

the story: what are three resources you swear by?

nat: first, friends & colleagues! staying connected with positive people in this business is a must for so many reasons. second, the performing arts library at lincoln center. if you’re a performer in the city and you’ve never been there, shame on you.  and third, this blog. this blog is a great, very helpful, entertaining blog, and I think everyone should read it.

(just so that everyone who’s reading knows, i — corey wright — pretty much blushed…and i’m black.)

nat: well, i’m from l.a. and now i call nyc home. so, how can i choose?! it’d be like choosing between two family members… or between tacos and falafel sandwiches. or between dolphins and giant rats… o.k. l.a.    no, wait! new york. ugh. i dunno. can i come back to this one?

the story: if you had to pick five other occupations to do — don’t over-think it — what would they be?

nat: teacher (i’ve enjoyed that very much in the past), director (which may happen one day), writer (workin’ on that now), fashion designer (i have so many outfits in my heart that aren’t in stores!), and something involving muppets. speaking of, when do i meet fred ‘n chad?

natalie is a california native who currently lives in new york city. she has performed on stages in hong kong, abu dhabi, and across the us, but is most recognized for her work on television. you may have seen her making a fool of herself and others on countless episodes of bet’s ‘hell date,’ fighting for her life on fearnet’s ‘buried alive,’ stuffing her face in numerous commercials, or singing ‘mama who bore me’ over and over again on the cw’s 90210. recent tv appearances include nbs’s ‘deception’ and mtv’s ‘i just want my pants’ back.’ she starred as ‘mimi marquez’ in ‘rent’ off-broadway at new world stages and most recently as a stand-on for cassie levy and rebecca naomi jones in ‘murder ballad’ at union square theatre in nyc. as a member of the ‘manhattan dolls’ — an all-female swing/jazz trio based in nyc — she co-writes the shows that tour in the u.s., europe, and africa. she sings on their debut album ‘the manhattan dolls – bringing back the sounds of the 40s’ which is available onitunes. she can currently be seen as ‘lenore white’ on hbo’s award-winning series ‘boardwalk empire.’